“…. Not only do the works highlight the problem of the amount of debris in the sea…. the mysterious, the unusual, the forgotten and lost. But these wreckage pieces, these objects symbolise the history of the world up to this point, they are contemporary and future archaeology. They both explain and are unexplained at the same time. Each remnant acts as a conduit between potential, real and imaginary worlds, where personal and cultural memory reside. These are the objects of our lives, this is the material of the technologically advanced.” Steve McPherson

Since 2007 Steve McPherson’s primary source materials have been the plastic objects that wash ashore on his local coast of the UK. While it is impossible to ignore the environmental concerns present in his work, he draws analogies with his practice akin to the role of archaeologist/collector/and paradoxical treasure hunter. 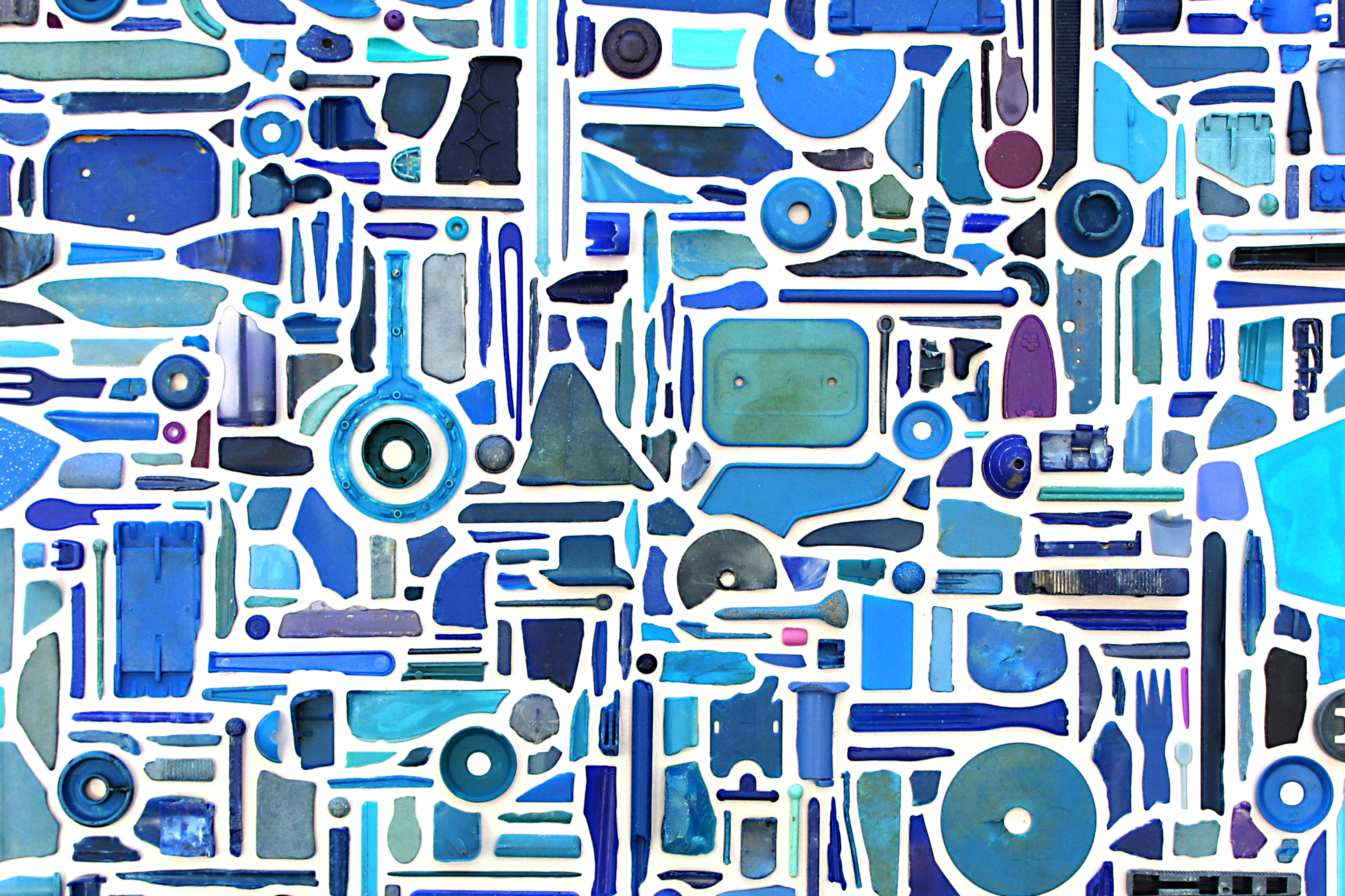 I propose to show a selection of works from my continuing series of colour field collections. Each artwork contains unaltered marine plastic objects found on the UK coast between 1994 and 2017, and are approximately 60x60x5cm, mounted in a white wooden box frame

These works engage through presenting familiar objects for re-evaluation. On inspection, a dialogue between the viewer and work begins, where some objects may act as keys to memories, but all present questions as to their origins and loss.

Note – Due to my colour blindness, anomalies are always present in the colour fields.  The artworks shown may not be the versions delivered for the exhibition. However, size and colour will remain the same.

You can watch a short film about Steve McPherson’s work and practice here: Lost Song

No1. Stop and Pledge to Stop. The action is to approach people on the streets of Amsterdam, who are using plastic bottles. We would discuss while offering them an information postcard regarding plastic pollution. We would ask them to pledge to stop using plastic bottles by having a photograph taken of them holding a placard stating that fact. This photo will be uploaded to an Instagram account linked to Universal Sea and other environmental groups accounts, to communicate our action and campaign. This action targets, and seeks to inform and activate directly those people who are evidently using single-use plastic.

No2. Based on Tibetan Prayer flags, where colourful rectangular cloths are strung in the Himalayas to bless the surrounding countryside. I propose a community project that connects my local area in the UK, with that of the grand opening location in Oronsko, Poland. This project would be targeted at a local Polish community group here in Kent. I would aim to meet with them to create flags from plastic bags gathered in the area. Instead of religious mantras and prayers, participant’s will decorate and write on them in both English and Polish, with a wish or hope for the future of our global environment. I propose that the final string of flags be displayed at the grand opening location. This action aims to target not only the audience of the opening in Poland but a UK local minority community group. It seeks to enlighten and raise questions regarding the day to day consumer choices of those who take part or witness the project.

No3. My locality on the coast of Kent UK is not only a Site of Special Scientific Interest (SSSI), but is dependent on a healthy environment as it is increasingly a destination for beach tourism. Through contact with a local primary school, I would arrange a project whereby school children and their families participate in a public version of An Undesirable Archive. Participants will identify plastic pollution in the environment and upload their photographs to a social media group account. These could then be printed and displayed together publicly, for example on a billboard. This action aims to target young families and children, and seeks to inform and make a positive impact on the way they interact with their immediate environment, whilst raising awareness of their consumer choices.

Over the years he has exhibited and worked with many global marine environment organisations, including developing products and printed materials to further awareness of plastics impact on our planet. These have included Algalita Marine Research Foundation (USA), Surfers Against Sewage (UK), Race for Water (Switzerland), MARLISCO (Italy), Plastic Oceans Foundation (UK), and more.