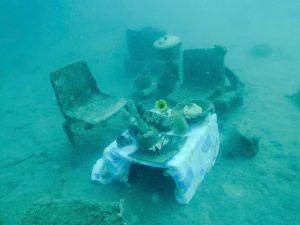 The installation I am presenting is located at a depth of -22 meters on a sandy platform at the bottom of a stiff marine cliff. This geological conformation apparently gathers debris which rolls down this cliff and is deposited at the bottom. The chairs,table and other plastic material are covered with a velvety layer of algae which give the objects a soft appearance. After a first fact-finding dive to explore the surrounding area, other four dives were necessary to compose the installation and make the video. I had to consider the undercurrent which was quite strong at times and wait for the adequate light and visibility to take the pictures since the sandy ground, if stirred reduced the clarity of the water. This project idea started last year, initially as an exercise we did in order to pass the scuba diving second level. Greece appears to be in a pretty concerning situation when it comes to the environment. Unfortunately there is a considerable lack of ecological consciousness and an impressive nonchalance regarding the future of this planet. Diving there for about ten years, I had the opportunity to visit a variety of submarine landscapes and to see what the situation is regarding underwater pollution. Sometimes it is terrifying, whereas other times we dare to hope that some places have it better. Under these circumstances, I grew a feeling of serious concern throughout the years and felt the need to act; this is why I wanted to include this installation as part of my thesis. Merryn Wainwright is a professional diver and a friend and she helped and accompanied me during the making of this installation. I was pleased to learn that she was very excited about the project and contributed with her point of view which I will mention as I explain the project. Underwater, things become trickier than on the ground: it takes time to move
something, we are slower, we work with a different gravity and we have a limited
amount of time and air. Thankfully, ironically speaking, the place where we set up the
underwater bar has plenty of material to use- there was a wide variety of plates, mugs
and glasses, branded cans, chairs, sandals, rain boots, scales, tires and the list goes on.
I wanted to create a familiar scene, something we are acquainted with and experience
frequently such as sitting around a table. There is, in my opinion, something quite
unsettling about seeing man made creations sink on the bottom of the sea,
annihilating the superiority we think we have overground.
We set a few chairs around a small table we found, added some bottles on it and
accompanied them with plates and a small pan. To make it seem as if somebody had
rested there, we put a pair of gummy rain boots next to a chair. It is very unusual to
find a pair of shoes underwater, usually you find only one but these we found sitting
one next to the other. On the far left, we put an old school scale and added a white
mug and a glass bottle. Since colors tend to disappear as one goes deeper, we were trying to find objects that had specific tones such as white, green, yellow and blue.
We found a few objects that had a bright color such as a few mugs, a metal lid on the
pan which is on top of the scale, the patterned, plastic table cloth and a bright yellow
plastic sunflower. With these elements, the whole picture brightened up and was more
visible. To add a background, we brought some tires from around a nearby shipwreck
and put them one on top of the other- the process was tedious and rather tiring as
some of the tires were filled with sand and embodied on the sea ground.
Nevertheless, the whole process was very playful and my diving companion enjoyed
following my instructions on how to construct the installation. Given the considerable
depth, only qualified divers will be able to go that deep and see it which restricts the
amount of views it would have but it also brings a different type of audience to
experience it.
“Divers tend to have a different background, which is an athletic one and their
interest is more targeted towards the sporty aspects of diving” says Merryn.
Those who are more artistically inclined are quite rare, which means we have the
fortune to bring two worlds together and raise curiosity and interest in a public that
might not be usually frequenting the art field.