“Aghia Kiriaki is a small fishermen’s village in Southern Pelion, Greece. It is uncontaminated by mass tourism and estate speculation and its coastal landscapes are beautiful. I have been spending all my childhood summer holidays there and am well integrated into the village community.

I started to take driving lessons in my teens and ever since continued to practice every summer. What struck me from the start was the incredible beauty of the seabed, scarred by the debris dumped unconcernedly. Environmental consciousness has started only recently to develop in Greece and older generations who experienced consumerism after decades of poverty after the war were easy prey to cheap, plastic throw-away products which often came to replace more traditional ones.

Kostas Kondos and Merryn Wainwright are professional divers and have a diving centre in Aghia Kiriaki.
They have a deep knowledge of the Mediterranean Sea and of its biodiversity as well as an exceptional experience in deep-sea archaeology.
Merryn has been of extraordinary help in setting up my project and in locating the ideal spot for the installation. 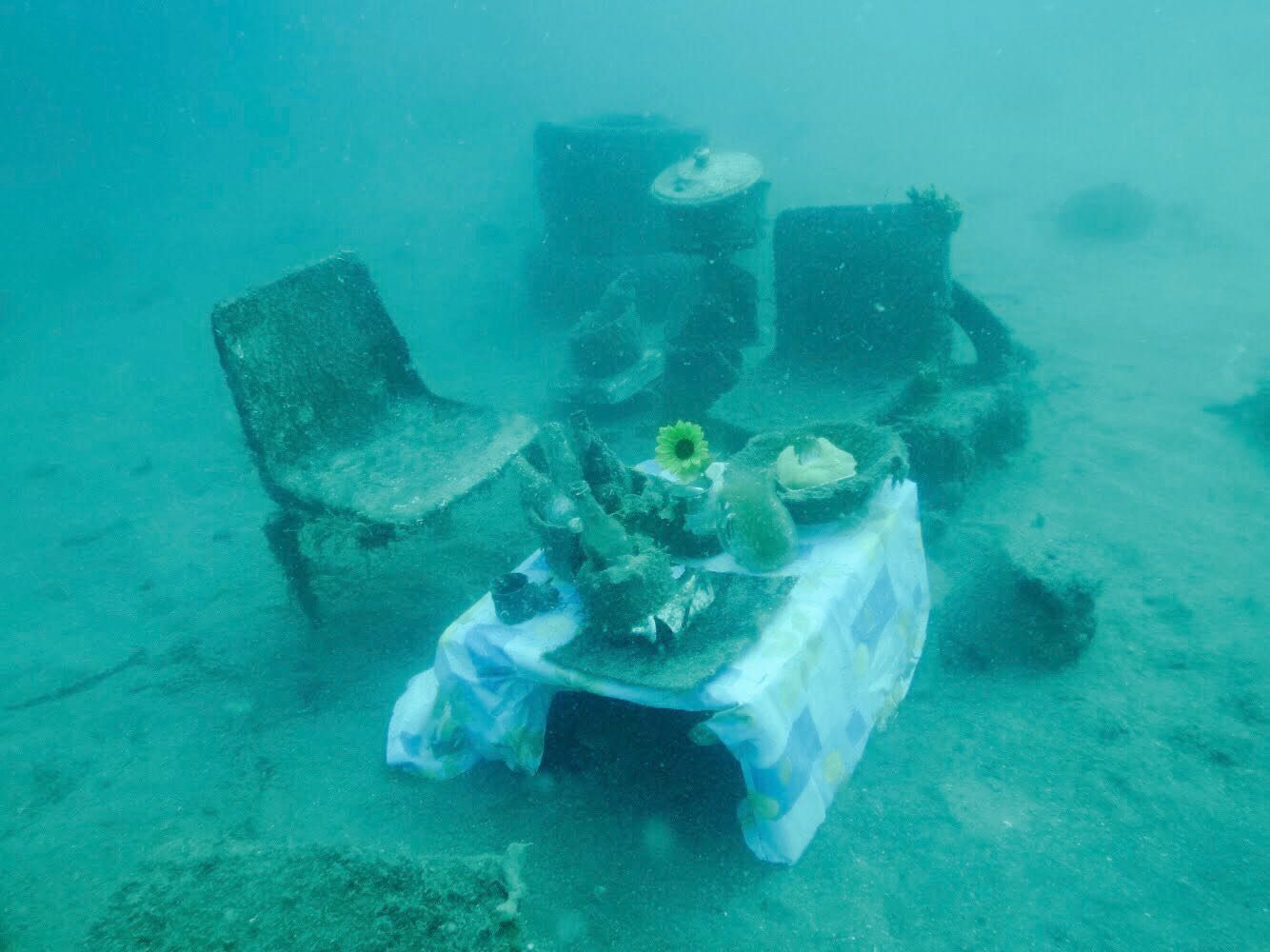 By combining my diving skills with an eco-conscious art practice I started a small-scale project in summer 2016 which tries to draw the attention of the local community to the problem of marine plastic pollution. Last year, I simply gathered a few objects I found on the bottom of the sea and set them up in a small scenario. This prompted me to explore further possibilities regarding installations. Last year’s work was swept away and I decided to start again this year. We only see the plastic on the sea surface or on the shores but there is as much of it underwater. That is what my installation aims at showing -what lies under the sea and is unseen, bearing in mind what Duchamp wrote about “other kinds of art- which are far less concerned with pleasing the eye than with deepening the way we think”.
The beauty and quietness of the submarine environment are breathtaking – one enters a different dimension with slower rhythms and softer colours which change depending on the depth and the transparency of the water. Although this natural beauty is in striking contrast with the garbage deposited on the sea ground, the colonies of algae and sea anemones covering it are almost capable of embellishing its ugliness.

In my diving sessions, I come across anything from car batteries to tires, fishing nets, crates, plastic chairs, paint tins and brushes, etc. I decided to make an underwater installation with all this debris, representing our leftovers in a sub-marine context to show what lies down there in the apparently blue and transparent sea.

The installation I am presenting is located at a depth of -22 meters on a sandy platform at the bottom of a stiff marine cliff. This geological conformation apparently gathers debris which rolls down this cliff and is deposited at the bottom. The chairs, table and other plastic material are covered with a velvety layer of algae which give the objects a soft appearance. After a first fact-finding dive to explore the surrounding area, other four dives were necessary to compose the installation and make the video. I had to consider the undercurrent which was quite strong at times and wait for the adequate light and visibility to take the pictures since the sandy ground if stirred reduced the clarity of the water.
This project idea started last year, initially as an exercise we did in order to pass the scuba diving second level.

Greece appears to be in a pretty concerning situation when it comes to the environment. Unfortunately, there is a considerable lack of ecological consciousness and an impressive nonchalance regarding the future of this planet. Diving there for about ten years, I had the opportunity to visit a variety of submarine landscapes and to see what the situation is regarding underwater pollution. Sometimes it is terrifying, whereas other times we dare to hope that some places have it better. Under these circumstances, I grew a feeling of serious concern throughout the years and felt the need to act.
Merryn Wainwright is a professional diver and a friend and she helped and accompanied me during the making of this installation. I was pleased to learn that she was very excited about the project and contributed to her point of view which I will mention as I explain the project.

Underwater, things become trickier than on the ground: it takes time to move something, we are slower, we work with a different gravity and we have a limited amount of time and air. Thankfully, ironically speaking, the place where we set up the underwater bar has plenty of material to use- there was a wide variety of plates, mugs and glasses, branded cans, chairs, sandals, rain boots, scales, tires and the list goes on.
I wanted to create a familiar scene, something we are acquainted with and experience frequently such as sitting around a table. There is, in my opinion, something quite unsettling about seeing man-made creations sink on the bottom of the sea, annihilating the superiority we think we have overground.

We set a few chairs around a small table we found, added some bottles on it and accompanied them with plates and a small pan. To make it seem as if somebody had rested there, we put a pair of gummy rain boots next to a chair. It is very unusual to find a pair of shoes underwater, usually, you find only one but these we found sitting one next to the other. On the far left, we put an old-school scale and added a white mug and a glass bottle. Since colours tend to disappear as one goes deeper, we were trying to find objects that had specific tones such as white, green, yellow and blue. We found a few objects that had a bright colour such as a few mugs, a metal lid on the pan which is on top of the scale, the patterned, plastic tablecloth and a bright yellow plastic sunflower. With these elements, the whole picture brightened up and was more visible. To add a background, we brought some tires from around a nearby shipwreck and put them one on top of the other- the process was tedious and rather tiring as some of the tires were filled with sand and embodied on the sea ground. Nevertheless, the whole process was very playful and my diving companion enjoyed following my instructions on how to construct the installation. Given the considerable depth, only qualified divers will be able to go that deep and see it which restricts the number of views it would have but it also brings a different type of audience to experience it.

“Divers tend to have a different background, which is an athletic one and their interest is more targeted towards the sporty aspects of diving,” says Merryn.
Those who are more artistically inclined are quite rare, which means we have the fortune to bring two worlds together and raise curiosity and interest in a public that might not be usually frequenting the art field.

The film and photographs I have taken,  record all the different phases of the making of the work from how I left it one year ago to now after a new intervention. I have sent the photographs of the installation and a short article to the most read online newspaper in Greece, i-efimerida.gr, with the purpose to raise awareness and show what lies underwater right there and how the ocean plastic problem concerns everybody from local to global level.
The initial idea was to bring the material of the installation to land and sort it out for recycling purposes but in discussing with Merryn, we had the idea to keep it there and use it as a reference location on her map of sites for other divers to see it.”