We only see what we believe we are seeing. The mental image that is mistaken for reality because it is not recognised as a kind of sensual-visual stimulus on the retina that is subsequently processed by the brain, in the end becomes the subject of a post-modernist question of faith, the representative of a wide range of possible visual interpretations, which again confirms the illusory nature of reality.

The impression is created of an aggregation, an accumulation, a collection, a concentration of cells or molecules in cellular or molecular compounds that find themselves in a continuous transformation of material and shape. This process of internal becoming and changing is condensed in Aggregation V-Dark light matter into an explosive moment in which the material splatters apart. A jagged, u-shaped, red-and-white mass that appears to be floating in front of the monochrome black background explodes on the left into countless elementary particles in a shower of sparks. Motion is itself the motif here, the enormous force released by the explosion that becomes a snapshot of bloated presence and exuberant energetic abundance. 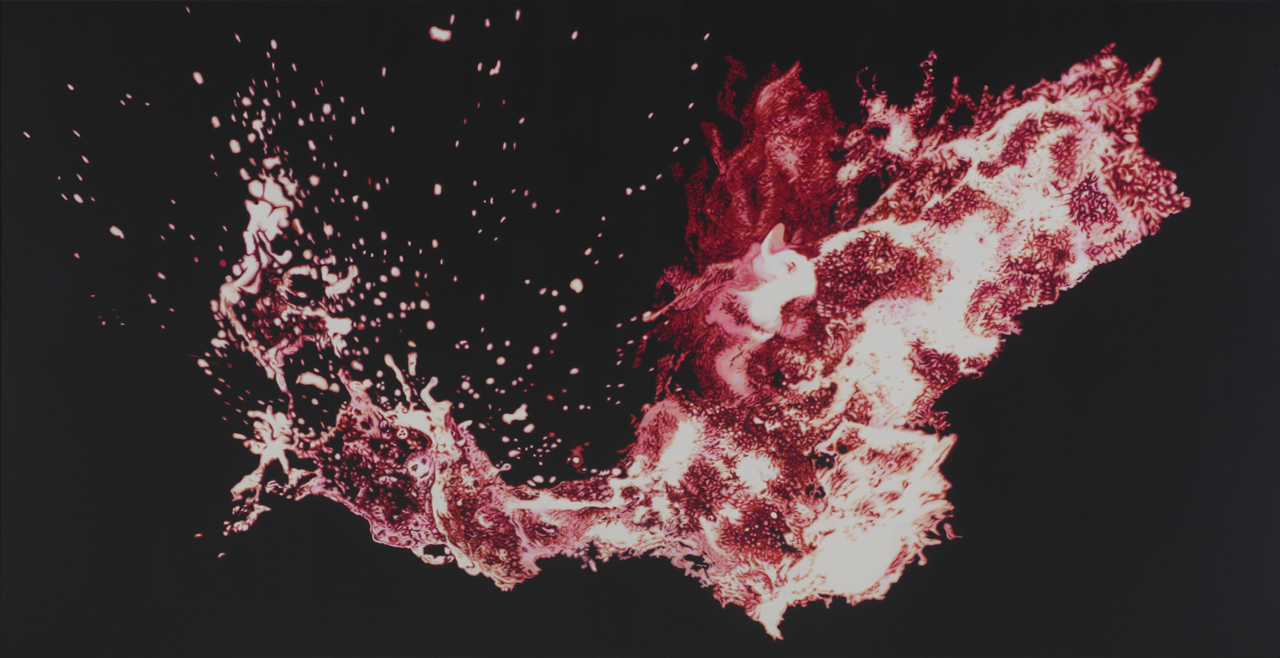 Franziska Rutishauser uses her artistic method of examination to ask what reality actually is and gives us her individual answers placing it in relation to her cultural background. Her focus on the range of motifs has been dominated since her childhood by immediate, sensory-intuitive experiences of nature as a complex and mysterious source of images. Her works reference the indissoluble links between people and nature and address the viewers‘ self-concern as the beginning of a process to expand the mind. Science was a major factor in driving a wedge between humankind and nature and causing humankind to regard nature as a thing, as a resource to be exploited instead of a relative who deserves respect.

In her most recent paintings in the series entitled Aggregation-Dark light matter, red combines with structures drawn from snapshots of flowing water to create ambiguities that cause irritation as the viewer attempts to reconcile the images with reality. The red appears with emotional significance that replaces the perceived synaesthetic association of the colour blue with cold.This red piles the aforementioned diversity of meanings onto the water from which then, at least in one possible interpretation, one compassionate intimation stands out: the understanding of the seen environment as flesh and blood, as ‘if it were a part of me …‘ (Rutishauser). The artist‘s attitude is based on the fact that the term Anthropocene, since it was coined by Paul J. Crutzen in 2002, has become an expression of a newly developing worldview of and about homo sapiens. Empathic identification instead of increasing alienation has here become the focus of artistic activity.