DELTA is a food design installation inspired by the idea that we are a part of nature’s circulation. The table symbolizes this process, which comes from nature but can be affected by humans. The table is structured by gravity, water and tastes. Water is directed by channels, just like rivers flow from the source (mountain tops) to the sea, or as blood flows in vessels in our bodies.

It is an interactive game. What happens at the table (such as the colour or the taste of the liquids) can be modified, symbolizing the act of human intervention. The liquid flows through the channel system and can discharge into glasses – which are drinkable. 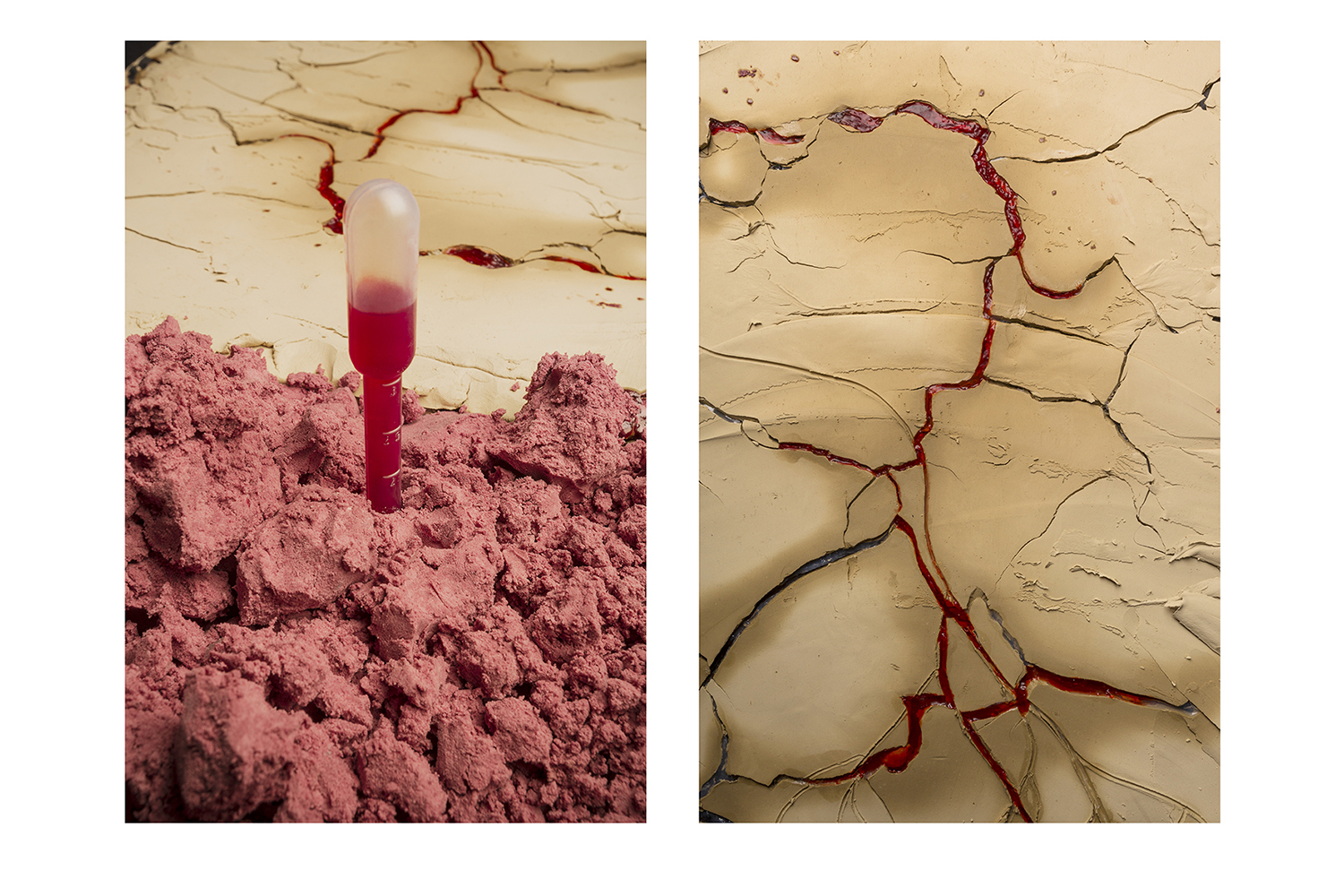 There is no direct access to the sea in Hungary. However, the most international river, the Danube flows through our country, making us part of a big, long chain. It connects all people living in the Danube basin. We think it is important to understand this interconnectedness and build a sense of shared responsibility for the quality of the river’s water. Given that water is a flowing resource, its contamination, or any human impact will have a chain-reaction downstream or towards the direction of the flow. That’s why we wanted to make a simple yet eye-opening artwork where visitor’s interaction is required.

We applied with our project, as an artist duo: Zsuzsi Matók (Nedill) and Enikő Hodosy. Zsuzsi is a food artist, and Enikő is a photographer also, who is managing the project, and Kata Molnár is supporting the artists as a sustainability and water expert.

Food Art event: we plan to create edible, food-art products to emphasize the fluid border between waste and consumed foods

Public talk and book promotion: Emphasizing the importance of the solutions side of the issue, Bea Johnson speaker, blogger, activist, author of Zero Waste Home is invited to the exhibition to give a presentation.

Zsuzsi Matók is a Hungarian artist and food designer, based in Budapest, Hungary. Se has a degree in Social Work BA and Cultural Anthropology MA from Eötvös Loránd University (ELTE).

She is the founder of food art and design brand, called Nedill – dating back to 2013, and she is working as a food designer since 2010. Basically, she works on concept-art projects with other artists. She has had many food art and design projects in connection with Earth and nature. Her latest project called: BLOOM – Where life is born was presented on Budapest Design Week. In 2016 with her project Near Earth Asteroids, she was nominated on the Highlights of Hungary Award.

Besides she is working as a food stylist in movies and commercials like mentioning some of them: Blade runner 2049, The Alienist and The Borgias – S04.

Zsuzsi is approaching the world of edible objects in a special, experimental way. She likes to experiment with new ingredients, and use edible materials to turn them into artworks, in an extraordinary way. Sometimes her almost mind-bending creations introduce food outside of the terms of gastronomy. Her aim is creating objects that have got special messages and are “alive” in a special way. She creates special concepts of food and craft, that are aesthetically far away from anything that we thought about food before. With the help of colors, structures, kitchen technology and, of course, flavors, new experiments are being carried out, to the results of which are presented to the public through a thematic exhibition.

After receiving her BA degree, she continued her studies in a Masters course at Moholy-Nagy University of Art and Design, Budapest.

She spent a semester at École de Recherche Graphique, Brussels with the Erasmus exchange program. During her MA program, she spent a year in Paris with Erasmus Internship, working in the field of luxury photography. She obtained her MA diploma in photography in 2016, with distinction.

In the last few years, her works have appeared in several exhibitions such as Ludwig Museum of Contemporary Art “XY – MOME Generation – Human Dignity”, the Hungarian House of Photography, and the Vienna and Berlin Photo Book Festival. Since 2012, she is a member of the Studio of Young Photographers. In 2014 she won a grant to organize her first solo exhibition called “Bleu”, which took place in the Project Room of Várfok Gallery. In 2013 she was selected into the top 100 of the Google Photography Prize. In 2015 her series „Projections” was shortlisted at the 5th World Biennial of Student Photography, Novi Sad.

Her main interest lies in the connections between the human mind, body and soul; and also in the introduction of social problems and brutality through an ethereal atmosphere.

Kata Molnár graduated from Lund University (2014) with an MSc in International Development and Management, during which she spent half year conducting research on the Nile river and agricultural investments in Ethiopia. She obtained her BA degree at Eötvös Lóránd University (2010) in Media and Communication.

She is currently consulting think tanks and governments with a focus on water security, diplomacy and sustainability, and translating Bea Johnson’s book Zero Waste Home into Hungarian that will be published in spring 2018.

Kata has five years of experience working with global water policy and research organizations focusing on agriculture, climate change, transboundary water governance in Europe, the Middle East, and Eastern Africa. She worked at the World Water Forum in South Korea (2015) and Brazil (2018), and co-facilitated high level political processes at key climate conferences (COP21, COP22) to support the implementation of the Paris Agreement. As a consultant for the Stockholm International Water Institute, she authored a paper on the connections between water diplomacy and foreign policy for German Foreign Office, and also contributed to the development of a methodology for a global assessment program on rivers. She is enthusiastic about motivating the future generation, and become an UNLEASH talent, an innovation program curating solutions for the Sustainable Development Goals global framework launched by the UN member states in 2015. She has lived in six countries including Denmark, Indonesia, Sweden, Ethiopia, France and Hungary.