“The issue of plastic contamination of world’s oceans has a lot of media coverage recently. People, however, have the tendency to ignore global problems, seeing them as distant and irrelevant for their everyday life. I believe it is necessary to send a message, which would place the problem in the centre of their day to day life, a message they could not simply disregard. My project is an attempt to construct such a message.” – Jan Sajdak

Jan Sajdak’s project consists of filling the Orońsko pond with thousands of PET bottles so that they cover almost all of its surface. The bottles would be closed and full of air so that they float; deprived of labels, so as to avoid their soaking and staying in the pond. The installation shall be called “How do you like it?”. The bottles shall be left in the pond for a longer time, if possible. The artist’s intention is that possibly the biggest number of local inhabitants can see the pond, their favourite place of Sunday walks, in the state of terrible transformation, resembling a dumping ground, that they can see that the remote issue of “stains on the Pacific” also touches their everyday lives in a very immediate way. This shall be the installation, passive part of the project. 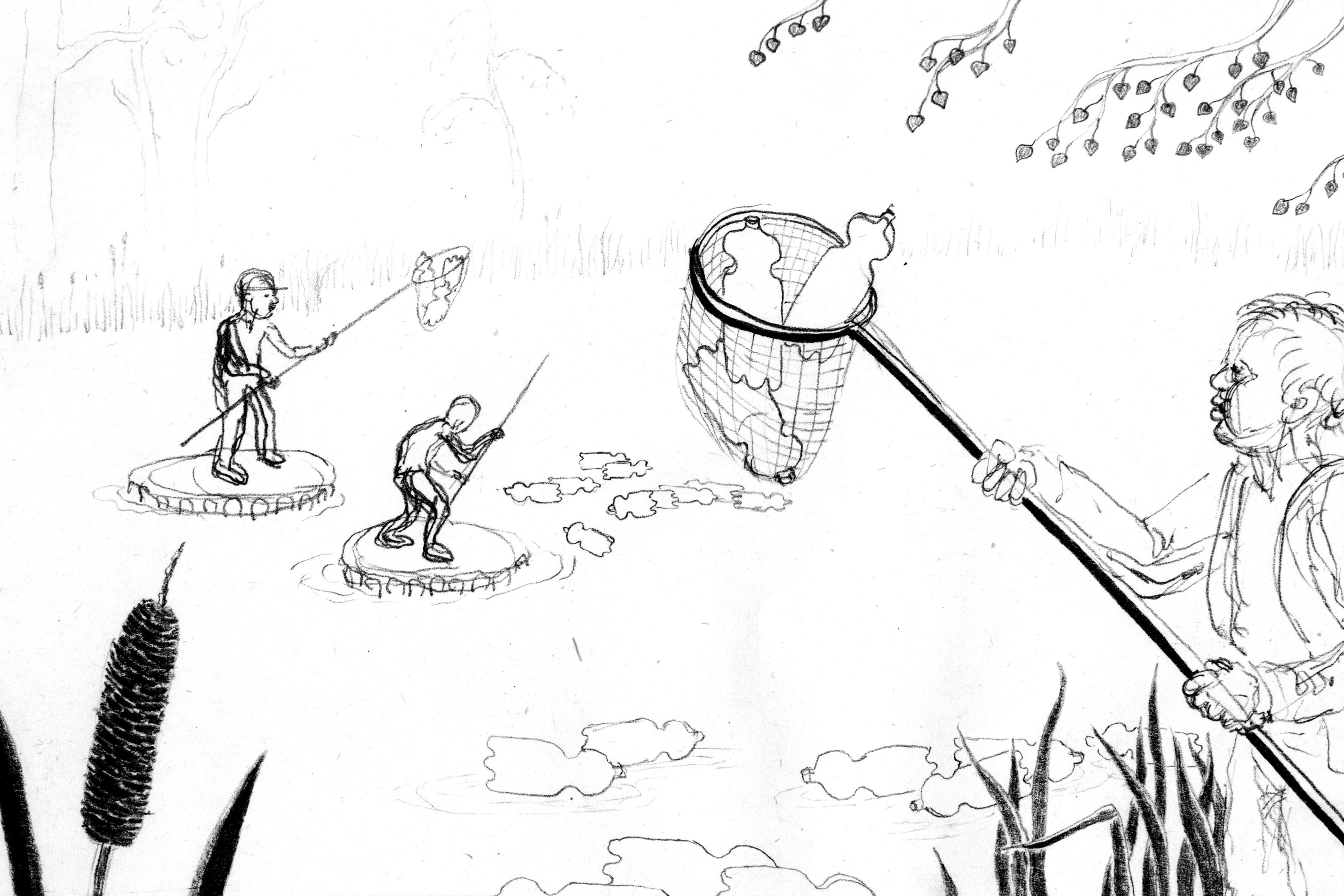 What I really care about is to work with all the groups of the inhabitants, but most of all: local children – forming their attitudes is the most important thing for the future.

The first stage shall be tidying up the pond together. First, we shall take the bottles out with all kinds of tools. When some part of the bottles is already on the shore, together we shall make of them a couple of small rafts, allowing to gather the bottles from the middle of the pond. I hope it is going to be an element especially liked by children, and it shall introduce them to the subject of creative recycling in a way possibly close to their imagination

After that the pond is already free of the “bottle suspension”, the next stage is the creative recycling. I would like, together with the workshop group/groups, to process some of the fished out bottles. I have two main ideas for the processing. I will also be glad to go for the kids/inhabitants’ ideas.

The third stage is the meeting with „system recycling”. Together with the children, we shall segregate, unscrew, squash the fished out and yet unprocessed bottles, pack them into bags or bins. I would like also, if possible, to arrange it with the local clearing company that a garbage truck comes for the bottles, together with an expert who would tell the children/inhabitants about the recycling process in his or her way, and tell them how they can facilitate the process. Taking the bottles away would be the end of the project.

The project’s aim is to present the problem of plastic garbage in a way which would strongly appeal to the imagination. It is also supposed to make people familiar with the workings of rubbish segregation and recycling. Those are for me the main goals of “The Universal Sea”.

This project can be realized everywhere wherein the centre of living space of a given community there is some pond or a lake. The more beautiful the pond, the more of a pride of the local community it is, the stronger the impact of the project is going to be. I believe in the simplicity of the message.

The impact is going to be stronger if a given group of people participates in all the stages of the project. I find the dynamics very important: from the confrontation with the problem, weighing heavily with its presence “here and now”, towards working out a solution together. I think that active joining the process of “saving” a particular water pool from “great contamination” can be a strong impulse for the child’s imagination.

Actions in other locations:

Making together from pet bottles small floating garden modules, hexagonal rafts carrying some earth and plants. It is a project I develop with my friend Borys Lewandowski and with him, I would like to run the workshop. Two such pioneering modules we had already realized with Borys as a part of the Day of the Earth in Orońsko in 2016.

Clearing a small pond (first filled with bottles) together with children group off the bottles (using various tools, including self-made ones, as well as making a couple of simple rafts, also used for the collection of the plastic remaining on the surface of the pond). A small version of the main project.

Possible In any location where there is a pond

Creative recycling, for example, “Frutti di mare”: imagine seafood in an age when all species of sea creatures are gone. Making together with the group improvised lobsters, squid, shrimps and other animals from pet bottles and composing them as a fishmarket showcase or as a dinner.

Possible in any location

Jan Sajdak is an artist from Poland. He was born in 1987 and he graduated the Department of Sculpture Academy of Fine Arts in Warsaw in 2016. He works with various materials. For years he has been developing a project of woven wicker tree nests for humans, inspired by bird nests. He frequently realizes weaving projects on the “Theater Village” festival with the Węgajty Theater. He took part in 2017 in the Podlaski Landart Festival and the sculpture exhibition “5 tons of sculpture from Orońsko”. Using art as a tool for raising ecological consciousness is a basic goal for him.