In 2015, a young lawyer Afroz Shah moved to an apartment near Versova beach, and as he recognized, one of Mumbai’s dirtiest beaches. He was shocked by the pollution that he saw: The plastic was 5.5 feet high. A man could easily drown in the plastic. And he decided to do something against this awful reality.

For his vision and hardwork of the Beach Clean-Up, the UN awarded Afroz Shah the “Champion of the Earth” award.

“I am an ocean lover and feel that we owe a duty to our ocean to make it free of plastic,” he told the UN.

Inspired by him, volunteers collected a staggering 5.3 million kilograms of decomposing trash and plastic from the 2.5 kilometer stretch of beach over a period of 21 months. 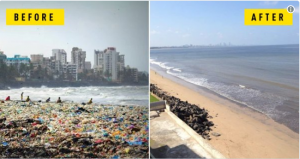 Until now Versova has transformed from filthy to fabulous. And the volunteer organization, Versova Residents Volunteers, also did other clean-ups such as 52 public toilets and even more fulfilling the vision of earth-lovers they planted 50 coconut trees.

Each year, 8 to 13 million tons of plastic make it into the world’s oceans each year—the equivalent of two garbage trucks filled with plastic every minute. Throughout the world, there are about five plastic bags filled with plastic for every foot of coastline. By 2050, plastic could outweigh fish in the oceans.

While companies are to blame for the massive amounts of plastic produced and sold, plastic pollution often happens on an individual level. If individuals can transform their relationship to garbage, then more beaches will begin to look like the Versova beach of today.

The Universal Sea – Pure or Plastic?! is a project aiming to strengthen creative civil participation against plastic waste in the oceans. Like Afroz, we are thinking about what actions could be done against the water pollution. Join us, write a post and share your ideas!