There was a sea that decided to reach the city and become famous. “For centuries … – it said, I was painted as large, flat, sloppy, in many shades of blues and greens, but I do not really have any shape.”
Each sea looks the same in the picture, it differs only in shade. “And I want to be special, be the centre of attention, be an art in itself! I want to become an urban sea for a moment! “, so the sea crept into the cities.

To the biggest, the most beautiful and following the channels and various mouths, it found itself in the centre and saw the sky through the crevice and how it did not gather with happiness, as it did not fire with its full power! It turned out that it was in the most beautiful possible place.
In the fountain! And now everyone could see it closely and admire it! – but suddenly our sea has been very disappointed. It turned out that along with this magnificence of color and transparency in which our sea believed, all its pollution came in. All the plastics. It was so polluted that no one noticed the beauty of the sea anymore and a beautiful fountain with the sea water flowing down the slender sculptures turned into a moving garbage. 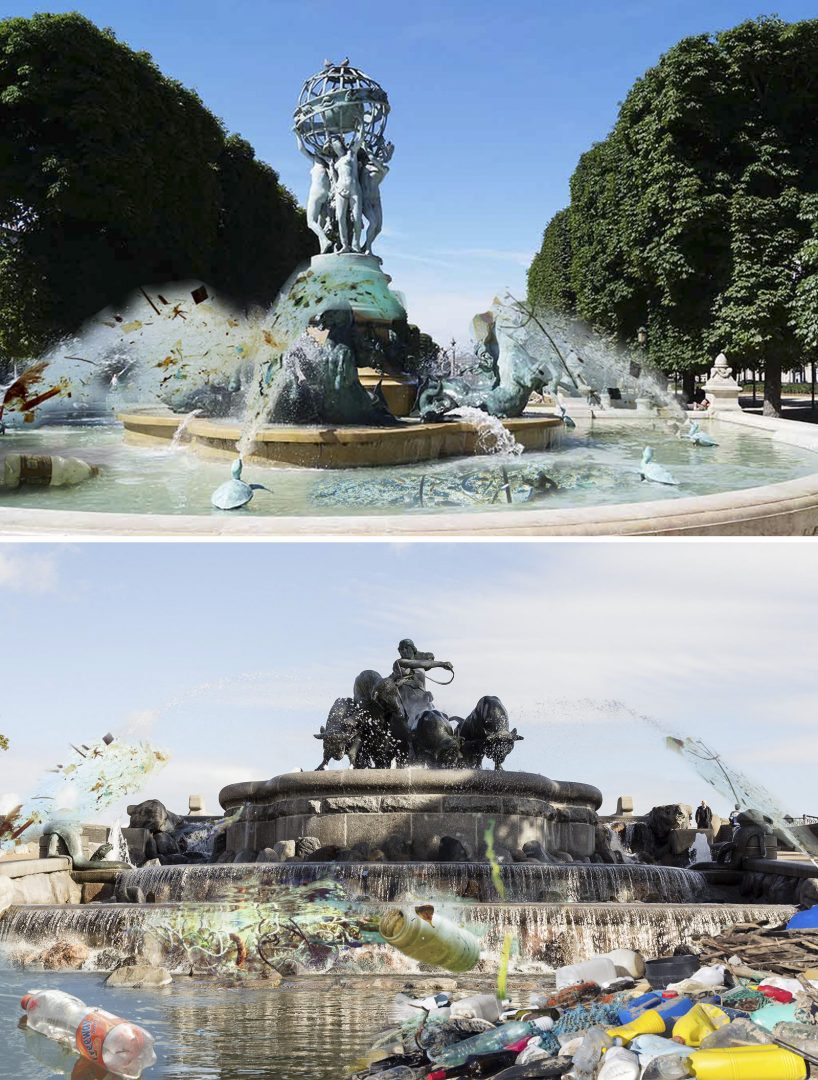 Such was the sad story of the sea, which for a while would become an artist and show the audience in the cover of famous sculptures of urban fountains. Urban fountains changed into moving garbage and no one noticed the beauty of the sea…
We are a lifetime artistic and design duo. For the first time, we perform with a joint project because we have both been involved in work with sustainability and ecology for years. We both are trying to deepen ecological awareness thru our work.

1. We would like to convince the public to use the fountain water to dump their waste. we want to (provoke) try to convince people that it anyway doesn´t matter where they leave their plastic rests.
2. We will propose to the tourists to take photographs in front of the beautiful fountains with the polluted water as if it would be just a natural and regular sight these days.
3. We will also convince the people to sit at the fountain and cool down their feet in the polluted water at hot summer days.

Daria Wartalska, born in Poland, is a PhD student of Sustainable Design in Poznan, Poland, and has been working with recycled products design since 2010. She studied at the Academy of Art and Design in Wrocław, Poland and Jerusalem, Israel; as well as Art History at the Wrocław University and at the Academy of Art and Design in Sarajevo, Bosnia and Herzegovina. Two years ago she co-founded tohu & bohu, a Polish-Swiss design-art cooperation. She has been showing her works internationally (Germany, Poland, Austria, Israel, Switzerland, Netherlands, Bosnia and Herzegovina). In her daily work she is trying to reduce global production and gives chance for local manufacturing and also popularizes saving energy processes in the field of design.

The famous city fountains can be easily transformed to be a trash mixture of water and most common plastic packages which we all are using every day. we decided to bring the problem of ocean plastic pollution to the most beautiful and touristic places in the European cities to make people from around the world aware that wherever we go the problem is the same.
let´s bring the ocean to the city!

How does it feel?