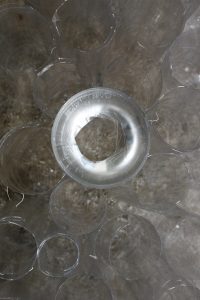 These days there seems to be an almost overwhelming barrage of images and information detailing the harrowing extent of humanity’s destruction of our fair planet that much of the populace is becoming increasingly numb, apathetic, to what are essentially vital issues. This overuse of shock does little more than spread guilt and shame around. Surely, it is far more beneficial to encourage thought into what can be done at a local level, rather than simply pointing fingers of blame. Humans are not as stupid or ignorant as some media might have us believe, so feeling like artists can have much more success getting their messages across to a wider audience in subtler, more friendly ways.

Virtually all the materials Andrew Hornett uses to create his art have previously been used for whichever purpose they were intended and would otherwise be destined for the recycling centre, or, as is becoming more and more apparent, simply cast aside. Over the past few years, Andrew Hornett has been focusing on collecting and creating from his own plastic waste. It is quite astounding how much of this waste a single human can accumulate in a relatively short period of time…how much does a village, town, city, country produce? He still finds it difficult to truly visualise the huge amounts of single-use plastic that has been and is still being manufactured and discarded, but Andrew Hornett feels he has much more chance to understand at this individual level. Most of the waste that he accumulates, he will use again and again in the production of different installations, often in very different ways. Once an installation has initially been built, it continues to develop, grow, evolve, throughout the course of the exhibition as he generates more material and follow his own train of thought. This is how the artist works within his studio, constantly experimenting with and moving his collected materials around. Andrew Hornett tries to bring this playful energy into the gallery. Despite how harmful carelessly disposed plastic is to the environment, he finds it to be an extremely beautiful and versatile material to work with. Andrew Hornett enjoys particularly it’s texture and translucency, and, depending on the light, how it can shine like metal, or be almost invisible to the eye. The installations he builds are always particular to the space and often include recognisable figurative or animalistic elements, which help in forming a simple accessibility for the audience, enabling a more direct human connection with the material. 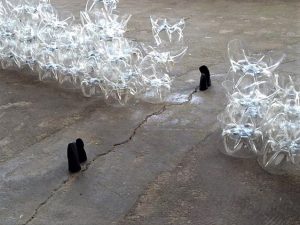 People tend to get much more out of an exhibition in which they are able to play a role other than simply being a viewer. There are three main stages within Andrew Hornett’s art practice, which boil down to the gathering of raw materials, the manipulation of this material, and the placement, or replacement, of these new objects in an exhibition setting. The artist would like to invite audiences to participate in each of these stages. Initially asking them to bring along their own plastic waste, they are then welcome to join him cutting, bending and twisting the material into shapes ready to be added to the ever-growing installation. If they do not wish to partake in this stage, then there will be plenty of ready-formed objects available for them to augment the installation. This format can bring an important social benefit to an exhibition and can be replicated in any number of venues, no matter how small.

Unfortunately, it is not feasible to get everybody in the world to collect, sort and reuse all their waste to the extent that I do, but I hope, through my various creations, to spark an awareness, to instill the notion of enjoyment around reusing materials in this throw-away society of ours. 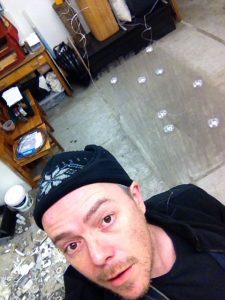 After graduating in sculpture at Bretton Hall (University of Leeds) in 1997, Andrew Hornett spent the next decade working and travelling, most prominently in Spain, Norway and China. Returning to the UK in 2008, he undertook a master’s degree in Drawing at Norwich University College of the Arts. On completion he remained in the small, soon to be coastal, city of Norwich where he rents a studio and regularly exhibits.

Documentation of exhibitions as well as my studio practice can be found at www.facebook.com/andrewhornettart