This project takes a more focused examination of our plastic throw away culture using the same premise of working within a much reduced carbon footprint. Recognizing the need to avoid transporting huge amounts of material in order to make an exhibition that at heart draws attention to human degradation of the natural world. In a space a large scale floor based installation is created by Paul Matosic using throw away plastic objects. As individual units these objects, whether they are bottle tops or disposable razors, plastic spoons or removable plastic wrappers are insignificant. It is only through mass accumulation that their impact can become significant. The making of the installation is filmed (one frame per second) from directly above. Filming takes place until the entire frame is full. At this point the arrangement of objects is transformed, objects are sorted by color to create geometric blocks within the film space. Further changes to the composition can be made. 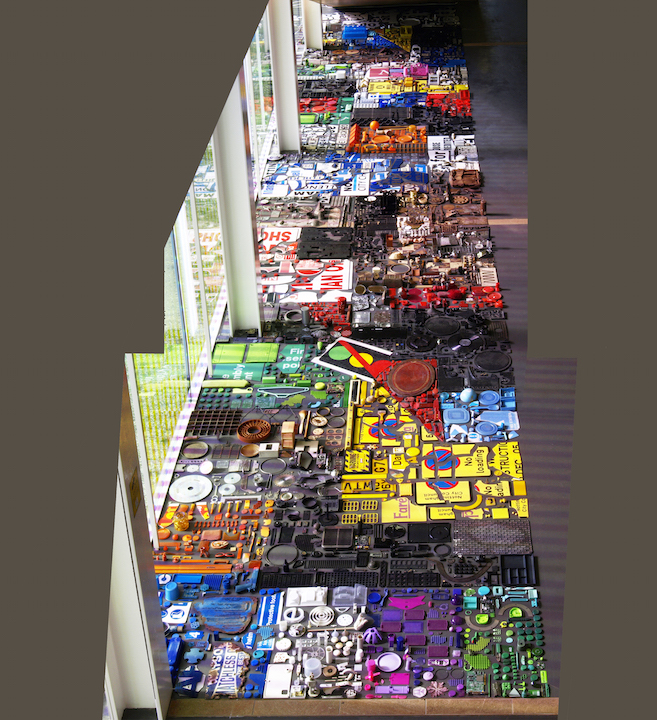 All frames that show the human form are removed and the resulting film will be resembled a stop motion animation as objects change positions. Because multiple objects are being used it becomes very easy to create animation sequences. Once complete the film is sent by the artist as a digital file and it can then be projected in life size onto the floor of the venue. Around this image actual objects of the same type should be placed. These objects can be rearranged during the exhibition period. Animation sequences in the film can be emulated using the same type of physical object i.e. bottle caps or plastic spoons. In this context all plastic that is found within the city environment has the potential of becoming sea borne plastic. Through the social interactive process of donation the issue of plastic waste and environmental cleanliness are highlighted. Accumulation of materials creates the potential for the materials to be effectively recycled.

More information can be found at the Artist Website