The adult Indian Yellow-nosed Albatross has a pale grey or white head and nape, with a dark grey mantle, upper wing, and tail. Its rump and underparts are white, and its underwing is white with a black tip with a narrow black margin at the leading edge. Its bill is black with a yellow upper ridge and red tip. The juvenile has a white head and all black bill.

Indian Yellow-nosed Albatrosses breed on Prince Edward Islands, the Crozet Islands, Kerguelen Island, Amsterdam Island (on the Falaises d’Entrecasteaux) and St Pauls Islands in the Indian Ocean. Of the estimated population of 180,000 birds, approximately 85,000 migrate to Australian waters. The population has been decreasing steadily for the last 45 years, caused by interactions with longline fisheries and the outbreak of introduced diseases. Its conservation status in Australia was upgraded from Vulnerable in 2000 to Endangered in 2010. 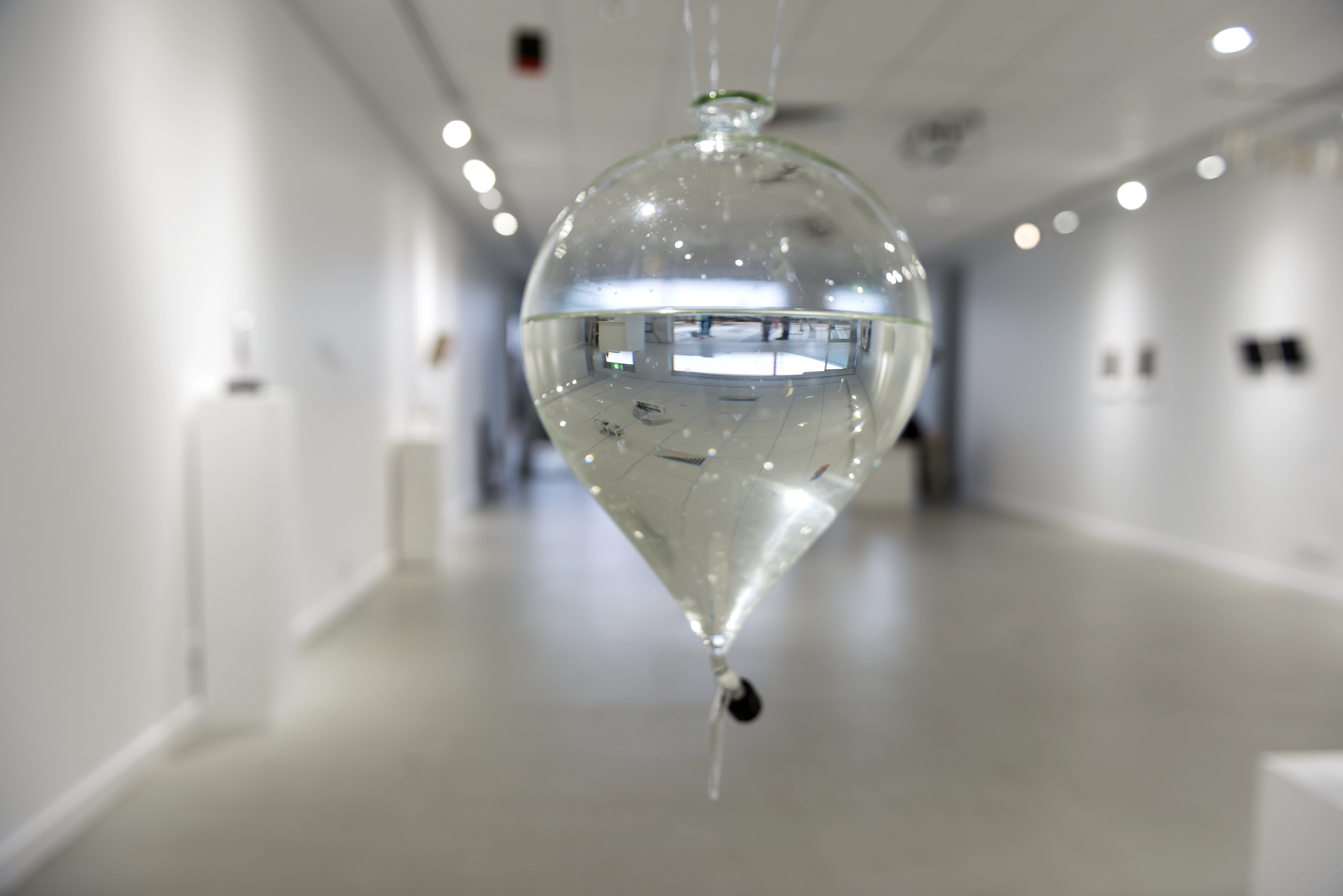 Bad Luck At Sea, originally produced for the Eggtooth exhibition in Perth, Western Australia, 85,000 drops of water from the Indian Ocean (collected by my brother) drip through a valve and stop-cock at the bottom of a suspended glass vessel (blown by my collaborator) slowly dissolving an Indian yellow pigment egg (sculpted by my sister) to make a watercolour painting on a circular sheet of paper (made by my friend), laying on a bed of sea salt (collected by my other brother), and finally exhibited (checked on regularly by my mother) in my own absence from the exhibition, due to my migration from my hometown overseas.

Bad Luck At Sea makes palpable the literal volume of birds threatened due to mis-use and abuse of the sea by humans. It also takes a romantic approach to the mystical and ultimately tragic lives of these birds, traveling huge lengths away from their families in search of food, and their tragic drownings at sea leaving their families ashore to starve and perish. The work draws on my own (and indeed the modern artist’s) bird-like nature, existing between continents and countries and often living away from my family. At the same time, with global travel so widely accessible in this modern era, our ever-increasing carbon emissions are beginning to affect the environment in dramatic ways. Our bird-like tendencies of frequent flying are damaging not only our feelings of displacement and alienation from our roots but also the environment, the world’s oceans and seas and in turn their ecosystems.

For The Universal Sea I am proposing to re-create this artwork each time it is exhibited in a new country, for a series of other endangered bird species native or local to the exhibition locations. Water will be collected from the community and local water bodies and used to create the work. The physical characteristics of each of these birds, as well as their known surviving populations will determine the sizes of the glass balloons and the hues of pigment chosen for each iteration. The residual painting from each iteration will travel with the work to the subsequent location, in effect accumulating a series of ‘stains’ representing each of the birds, honouring their noble and tragic fates, and opening up a conversation about our human impact on individual endangered species, the finitude of natural resources, and the precarious balance of the environment which we humans are responsible for caring.

Claire Krouzecky was born in 1986, Perth, Australia. She lives and works between Australia and the USA, and is currently based in Brooklyn, New York. Claire works across disciplines that include painting, site-specific installation, performance, video and sound. Her works often develop over a duration and are best described as accumulations — in real time, observation, or recordings. Her practice inhabits a space between the romantic and the conceptual, and her subjects usually revolve around light, air, water and spirits. Claire is also engaged in several ongoing collaborations; including a public installation and performance art group Inter Collective; and Nuclei, a collective of Australian artists, writers, curators and architects that investigate the fieldwork practices of contemporary nomadic and island-dwelling artists. Claire graduated with an MFA from the Tasmanian College of the Arts in 2013 and most recently worked as Collections Manager at Picture Room, New York. She has been included in several group shows at institutions across Australia, including Contemporary Art Tasmania and Perth Institute of Contemporary Art. Her work is held in private collections internationally and most recently she was artist in residence at Villa Lena Foundation, Italy.