Five years ago, I became aware of the existence of the 7th continent or great Pacific garbage patch. It is a swirling soup of plastic micro particules leading to the intoxication of marine fauna. The impact of plastic pollution is especially important for the survival of albatross. Indeed Albatross are prone to eating plastic debris and feed it to their chicks, because for them, plastic smells like food. Now nearly all Albatross have plastic in their stomach, and their population is sharply decreasing. I decided to make an artwork inspired by this situation: Plasticos Multicolorus.

This installation is made out of plastic garbage and shows ways to recycle this garbage. It also makes us reflect upon the fate of birds: if nothing is done concerning the plastic pollution of the seas, only plastic birds might survive! 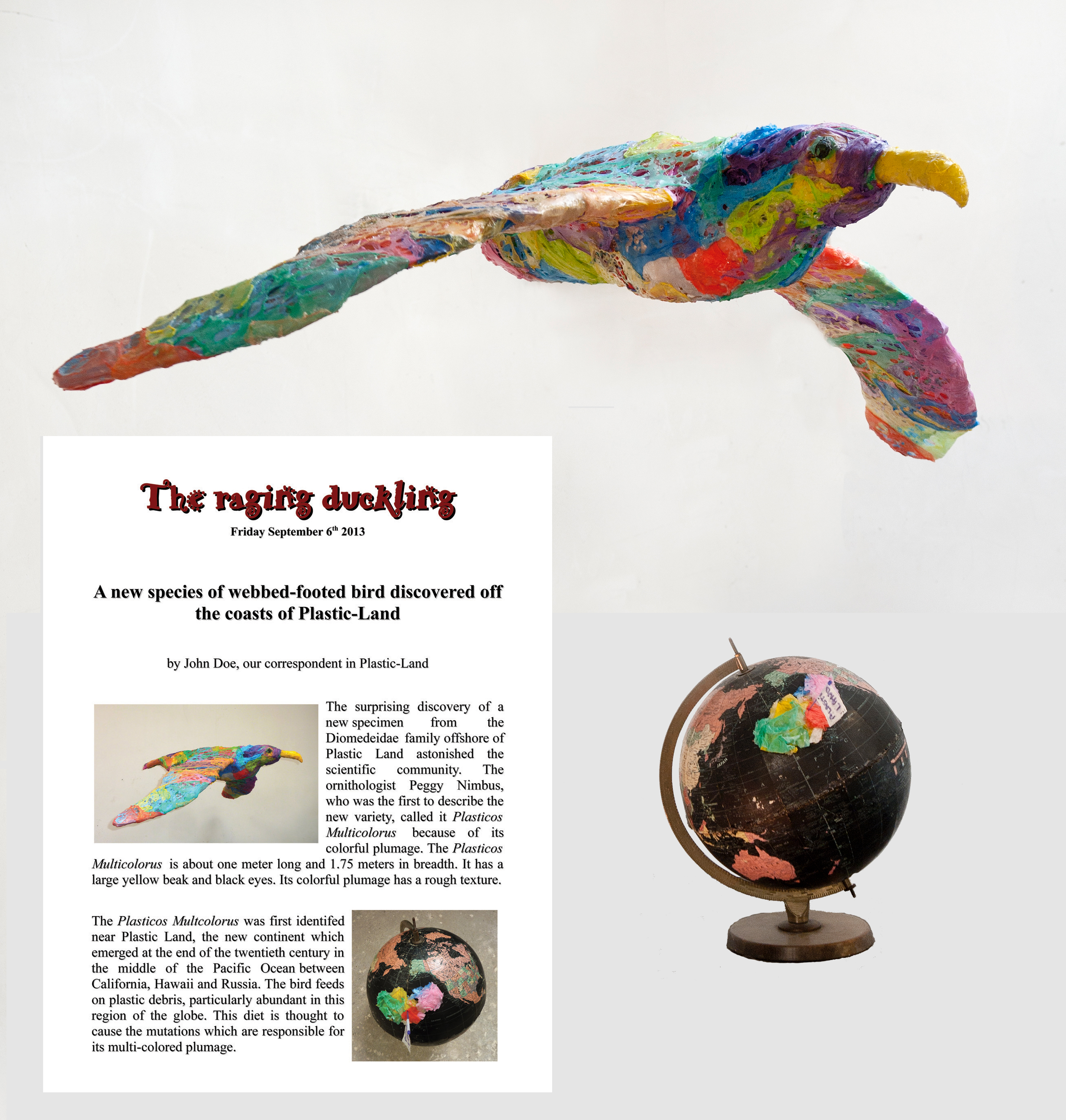 Interaction with the public

Workshop with children in Palma de Mallorca: children should pick up plastic waste on the beach and use this material to build a plastic animal (2D or 3D). It should make them aware of the impact of plastic pollution on the marine fauna, and show them how they can use plastic creatively instead of throwing it away.
Action towards passengers of giant cruise ships in Venice: this action could be undertaken with the collaboration of local NGO and volunteers registering for the workshop. A large-scale sculpture would be built using plastic waste near the area where large cruise ships are docking. This sculpture would be used to attract the attention of tourists and provide them information about the impact of plastic pollution.
Public debate in Budapest: I would also like to be part of a public debate including scientists, artists and members of local NGOs about the plastic pollution of the sea and actions that should be taken to reduce this pollution.

Objects are core elements of Denise Frechet’s vocabulary. By removing them from their original context and displaying them in a work of art, they acquire a different meaning. They are chosen for their strong symbolic charge and combined with other elements, they question the viewer. Denise Frechet gives a second life to recycled material, builds new forms using a variety of techniques: ceramics, fabrics, wood, plaster, paper, glass or metal… She assembles, constructs, deconstructs, her initial idea being in constant dialogue with the material. This interactive process ends when she can give a title to the artwork. Her work tells poetic stories about the desires and contradictions of our time and reveals a sensitivity to nature, environment and contemporary society.