The expressive power of costume is the fulcrum of Marjorie Chau’s artistic activity, at the center of a multimedia work, which combines installation, performance, film and choreography. Its scenic impact is intensified by the use of stilts, and by the grand dimensions this quasi-sculptural presence, indissolubly linked to the body that wears it. This is the origin of her astonishing and surreal figures that burst into reality with the visionary force of the fantastic, often drawing on the mythology of Chile, the artist’s birthplace.

Caleuche, inspired by a legend from Chiloé Island in the south of Chile, is a ghost ship that appears in the night with dazzling white sails, before disappearing suddenly and continuing to navigate under the surface of the water. Its creator is Millalobo, half man and half sea lion, lord of the sea and custodian of the souls of shipwrecked people, who have become part of his crew. 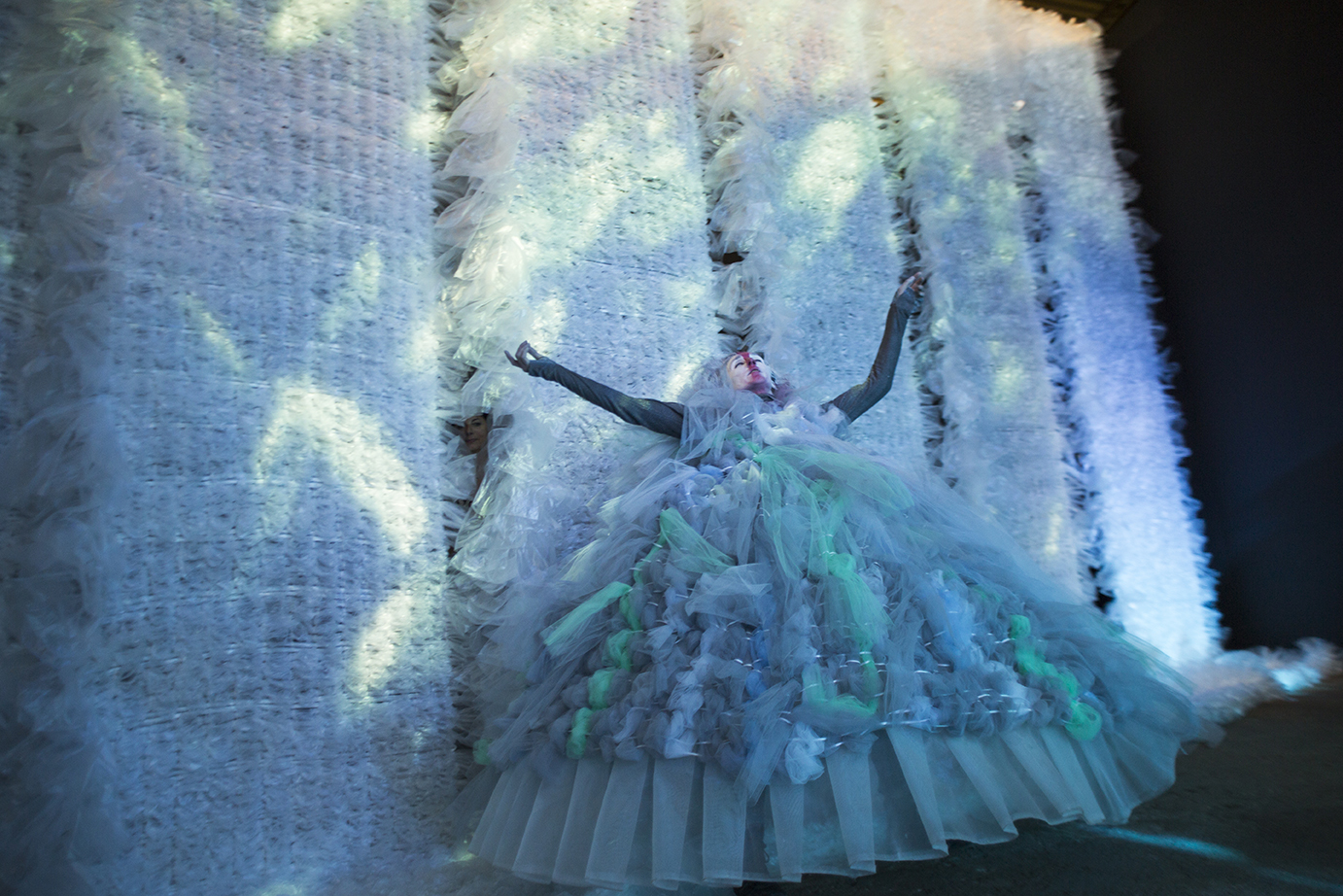 The work is an interactive installation, in which a large projection screen accompanies the performers who represent the characters in the story. The screen is made from sheets of plastic woven together with a Mapuche loom, in the Chilean tradition. The clothes are also made of the same material, which the artist sources directly from Chile, as it is a particular type of plastic made from packaging that is no longer produced in Europe because it is highly polluting. As a double reflection of that floating carpet of rubbish that causes the death of many animal species in the Pacific Ocean, the screen’s wrinkled and translucent surface reflects the images of underwater fauna, evanescent apparitions that are accompanied by the notes of a soprano voice. Sewn from several parts, it also recalls the white sails of the ghost ship, as do the chromatic shades of the costumes. It nostalgic returns to a marine vision, the tragic image of the surface and the internal treasure chest that pulses with life.

Caleuche is a work which looks at Chilean stories and mythology from a contemporary viewpoint, with an explicit reference to the dramatic environmental issue of pollution in the Pacific. Compared to the artist’s previous works it is also the one in which the lessons of Butoh, learned in Chile during several years of experience in a dance company, are most evident. All of Marjorie Chau’s works can be interpreted as the construction of an extremely personal language, which is conferred on the costumes that unite elements of Butoh and aspects of the acrobatic world (like the use of stilts). However, in Caleuche, we also see on the surface a sense of spirituality that recalls that coexistence of life and death that is expressed in Butoh dance, defined by one of its founders as the “Dance of Darkness” 1. This surface is also the expanse of the sea, a thin membrane that separates two kingdoms but which can easily be penetrated, when in the night the ship with the souls of the dead emerges from the abyss. Then there is no longer a separation between the internal and externals worlds, life and death.