“A good blow of brooms! ” This expression, how much time formulated it or heard!
It evokes a decision-making when the events overflow us and that it remains us more than this solution: To make the clear place!
My message: “A good blow of brooms! ” is an awakening of the state of our Ground, with its various types of pollution, of water, the air, the grounds, and the urgency to preserve our environment. The pollution of oceans often comes from the land where waste is dumped at sea. Pollution also comes from fertilizers, animal waste that pollutes the oceans by infiltration.
These brooms need to clean land, landscape if we want our oceans are in paradise. This setting in the scene of this “corps de ballet”, given by fifteen brooms in action, in rhythm, shows us the will to clean and maintain nature. Size of the brooms (seven meters in height) is equal to the task which is assigned to us: that to preserve the ground, the ocean and all the landscape.”

Patrick Demazeau made this installation in June 2016 at the National Museum of Marine Sciences and Technology in Keelung/ Taiwan. Just after he had finished the installation, a young married couple came to take pictures. “That’s why I chose this picture, it’s also the future of our land.” – P. Demazeau 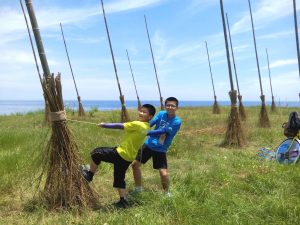 The artwork was realised during a three-week residency at the Eco Park at the National Museum of Marine Sciences and Technology, with the help of assistants selected by the museum. Throughout the year 2016-2017, Eco Park has become a meeting place and increases awareness towards the problem of ocean pollution. Many people come with friends or family to take pictures. Patrick Demazeau explains that he collected more than 1000 photos on the Internet and made a notebook to show the joy of these Taiwanese.

Link to the notebook HERE

The artist proposes now to realise the project “A good blow of brooms!” in different locations by carrying the message: “Clean the earth of plastic waste and others to save our ocean”. The manufacture of these immense brooms is simple and can be adapted to different places.
Demazeau aims at organising interactive co-creation workshops, the public is invited to take part in. The artwork could furthermore be designed on the water, as he had already done it on a beach in Brittany and in other public spaces. Another advantage, says Demazeau, is that the brooms can be made with different materials. 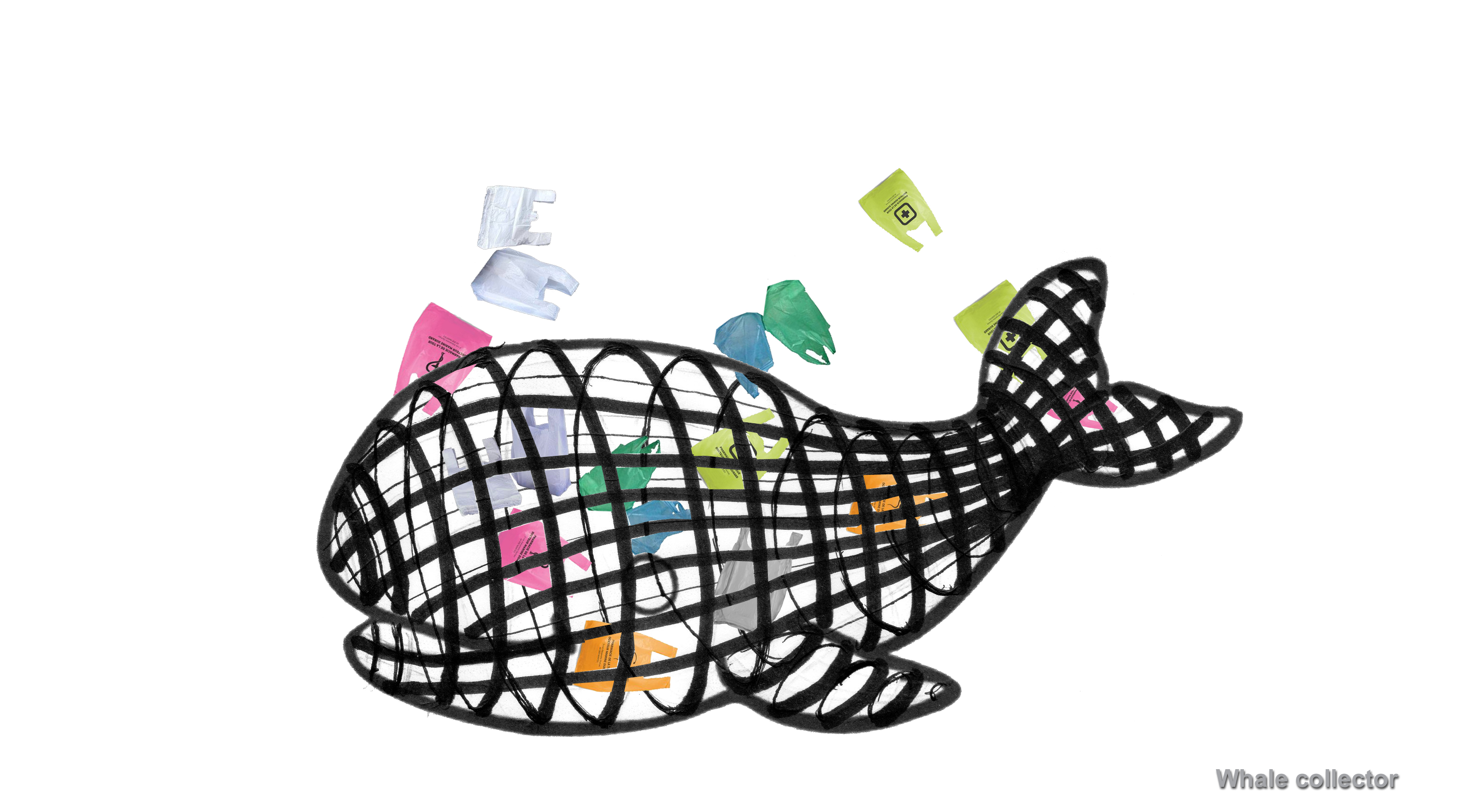 Patrick Demazeau proposes, also, with the people to collect in the public space or in different places plastic bags to fill the belly of this whale, in order to make people aware of the pollution problems of our oceans and of those who live there.
Usually, plastic bags or packaging are put in garbage cans in public places or they disappear from our site and our thinking. He aims with the sculpture at making these plastic bags visible in the belly of the whale.
This sculpture is made for young people and raises awareness of pollution problems with plastic bags This sculpture will be made of iron it will be around 4 meters long and 2 meters high.

Patrick Demazeau, also known by his artist’s name MADE, is a French artist, who resides in Massy, France.
Artist Page: http://nature.art.free.fr

1975-1986: studies fine arts city of Paris
1987 Creation of frozen Art
1999 Book “L’an 2000 exquis”
2000 Creation of Fioulrelle (derivative of the watercolour)
2000 The watering-can, monumental Sculpture RUNGIS
2005 Prices of the jury, sculptures – Cunlhat
Since 89 works on spaces of communication in the cities, villages and in nature. Takes part in symposiums of sculptures (Chile, Belgium, Germany, Estonia, France, Korea, Finland, Peru, Taiwan, USA, ) and worked with the Niçois group “the CONSPIRATIFS” on architecture and town planning.