Around eight million tonnes of plastic enter the sea every year.  A Drop in the Ocean is a series of art installations and community engagements which aim to challenge people’s attitudes and empower them to make a change. Using art as a catalyst for conversation, together we can put an end to plastic pollution.

Diane Watson is a freelance environmental artist with an MA in Ceramics and BAs in Textiles and Ceramics. Her work has been featured in several exhibitions including Thought Foundation; Festival of Thrift, and Navigator North’s Latest Edition project in the north of England. 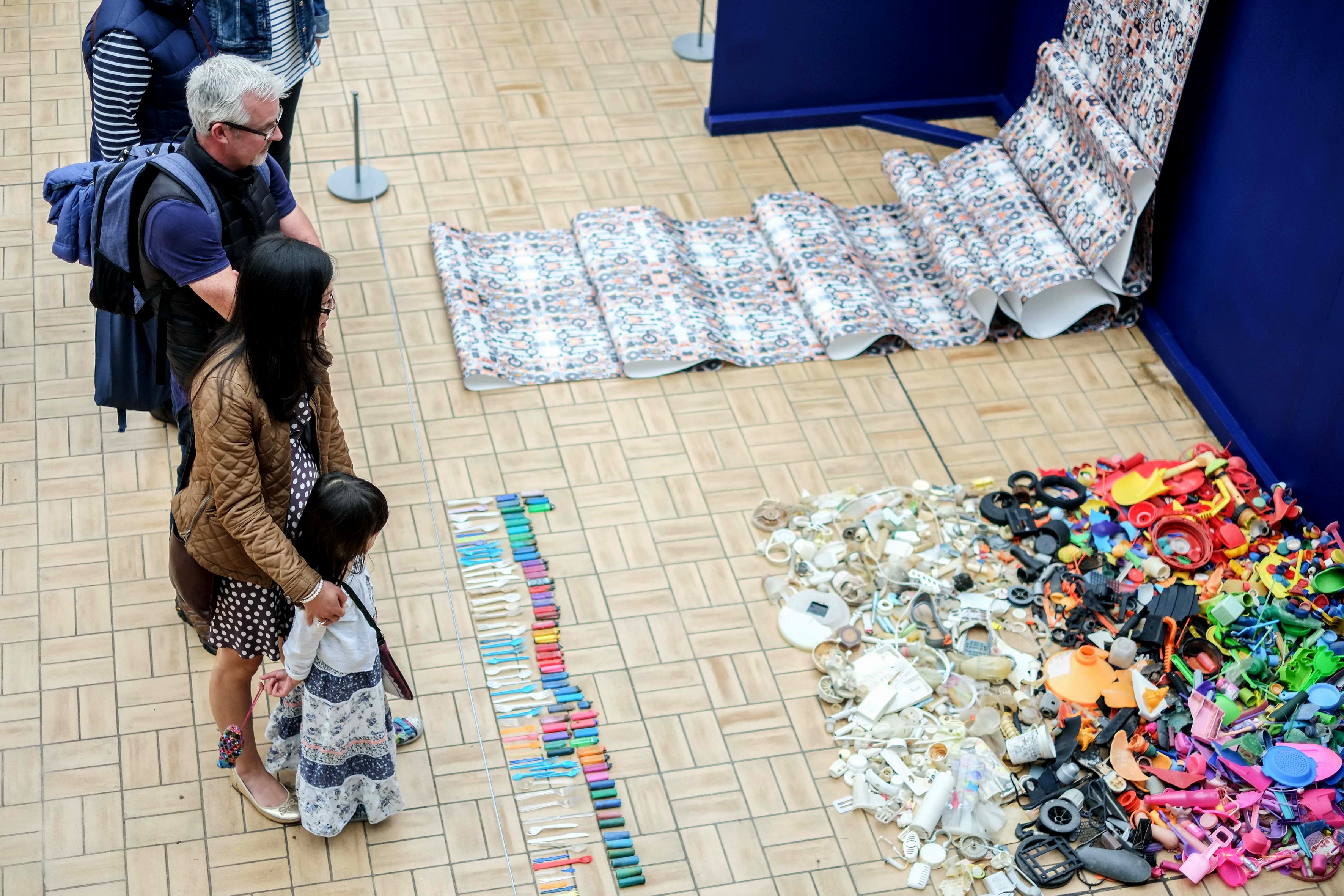 A Drop in the Ocean explores the issue of ocean plastic with the initial work representing a fraction of the plastic waste which ends up in the oceans every year. This 10m image depicts one tonne of plastic by repeating a single image of 5kg plastic, 200 times.

The work highlights how disposable plastic items have become and how people are oblivious to the long-term impact of discarding an object. It challenges the viewer to inspect these objects in an unfamiliar context and re-evaluate their relationship with single-use plastics. Look again and consider not just the manufacturing cost but the cost to the environment.

The work comprises images of disposable plastic collected from coastal areas. Some of these are familiar such as bottle tops, broken spades, chip forks, cigarette lighters, beach toys and tampon applicators. Others are more unusual – industrial waste, marine pumps, even cassette tapes from the 1980s.

The plastics are cleaned, collated and organised into themes – colour, size, frequency or shape, before being photographed. The images are then manipulated to create a striking, challenging artwork which requires closer inspection.

Diane Watson’s aim is to expose and re-evaluate our relationship with plastic by reproducing in detail items we rarely give a second thought to. Small objects that once belonged to children such as toys, spades and sand moulds have heightened the significance of leaving a better place for future generations.

“I want to develop my ideas further to create sculptural installations, targeting different publics. With all three interactions, the aim is to move beyond awareness raising, to challenge attitudes as a catalyst to bringing about behavioural change. The outcome will be publics making a conscious decision to take personal responsibility for managing their use and disposal of plastics.

A secondary aim is to increase pressure on those groups which contribute to ocean plastics such as manufacturers and government at all levels to influence public policy and legislation.

The first intervention would be with an aware public which has a high usage of single-use plastics – students and young people. On university campuses, there is often high consumption of plastics such as drinks bottles and plastic cutlery.

The work would encourage participants to bring their own plastic finds to a collection point where items could be collated and then used to create a sculptural piece, perhaps interpreting themes associated with the location. Engagement would be encouraged by asking collectors to recount their own experiences, where they have found items and their shared experiences. With the student population being drawn from a wide geographical area, this could bring an international perspective to the work.

This intervention targets those who are the source of the plastic pollution problem – the manufacturers; distribution networks; retailers and the government agencies who regulate the plastic manufacture and use.

I have already forged good partnerships with water companies and waste management firms, who are supportive of using art to create public awareness. Ideally, these partnerships could be nurtured to generate commissioned themed works to reflect a particular issue, for example, a sculptured tap made from plastic water bottles reclaimed from the sea.

Alternatively, a guerrilla-style artwork could be explored, filming the installation of a sculptural piece made from plastic packaging within supermarket aisles. While a risk, this method has awareness raising, viral potential.

The final intervention focuses on the controversial use of plastic tampon applicators, and specifically the alarming trend for women to flush these away rather than dispose of responsibly. These are among the most commonly found items on my coastal collections!

From the discarded applicators, I would create a series of jewellery and encourage women to wear and then photograph themselves at public places. The images could then be shared using the #dontflush hashtag. This controversial theme is intentional as it impacts women of all ages and highlights that there is no specific need to use plastic applicators – the image will raise awareness through shock and hopefully change attitudes and behaviours.