Petro is a cast of a piece of driftwood in pitch resin. The piece had washed up on the shores of the John Muir Country Park beaches on the east coast of Scotland. Its origins are unknown and the time is spent at sea are only traceable by the erosion of the waves that have smoothed out its detail. It is often difficult for us, as humans, to understand geological timescales. We can only truly emotionally relate to what we know and our short lifespan is merely a speck on the face of the earth’s movements. It is within this realm that I place my artistic practice. – Giulia Gentili

The choice to cast the piece of wood in pitch resin is multifaceted. Similar to bitumen and seemingly artificial, it is a natural material. It has a plastic-like aesthetic which alludes to the human imprint on our oceans and the slew of artificial materials that are washing up on our beaches every day. For this reason, the negative change to our planet over the course of the Anthropocene is perhaps most noticeable in our waters. 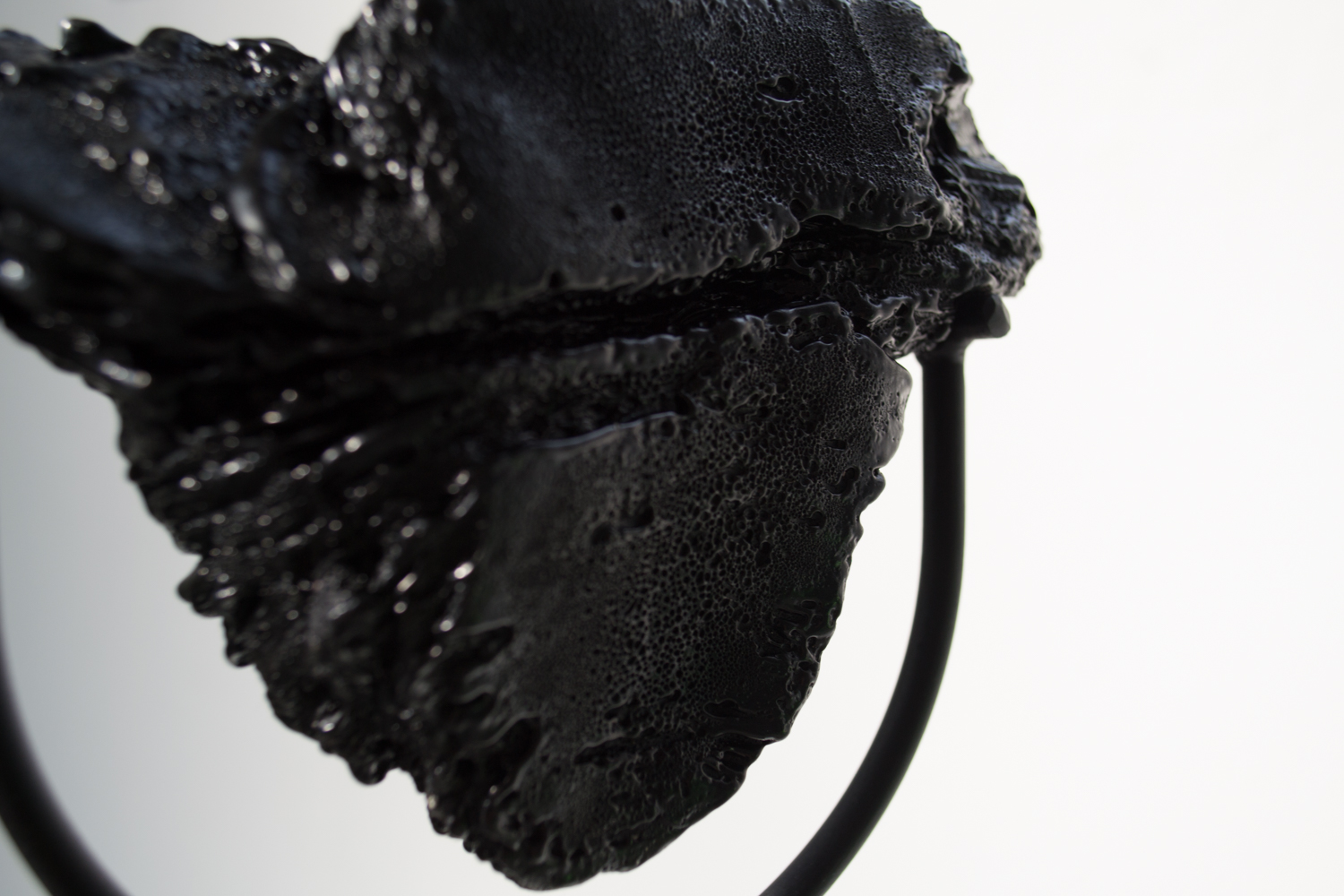 Perhaps pitch’s most interesting and unique quality is its viscosity. Similarly to glass, over extended periods of time, the material slumps and changes shape. Like the geological formations of the earth, these movements are not visible to the naked eye but can be observed over time. At room temperature, tar pitch flows at a very low rate, taking several years to form a single drop. It has therefore been the subject of scientific research over the past hundred years in the form of the Pitch Drop Experiment in which a small piece of the pitch was put in a funnel to measure its rate of flow. To illustrate the point, the experiment at the University of Queensland which began in 1927 only had its 9th drop in 2013. It has even been noted that the movement of the pitch is similar to that of glaciers in the way that the ice forms and sets.

Giulia Gentili’s practice often hinges on material culture and a scientific approach. She believes that art is a non-scientific use of science. “As artists, we try to find a way to understand the world that surrounds us – be it one way or another – in a similar manner to scientific research yet it is unconstrained by the rules of rationality. Using the arts to deepen our emotional understanding of nature and the environment can strengthen our passion for it and consequently could catalyse change. Ultimately, how can we love something if we do not learn to understand it? ” says the artist.

For her first action, Giulia Gentili proposes a ‘guerrilla’ casting workshop to take place on the beach. Using recycled food cans and repurposed pewter, she has developed a method using damp beach sand to do the simple pewter metal casting. The workshop would involve a short beachcomb in which the participants would be asked to search the beach for an item they wish to cast (such as limpet shells). The object is then pressed into the damp sand and then the pewter is melted using a blowtorch and poured in. This activity would use beachcombing as a way of discovering the treasures within our waters whilst looking more closely at the things that should not be washing up on the shores.

Similarly, her second action would also be casting based, however, in this case, she would take a group of participants to collect plastics washed on the beach. She and the public would repurpose our findings and use them as a casting material. The plastics will be blending and poured into some premade moulds such as bowls. In this way, waste is turned into a useful object.

Her final proposed action would be a workshop in which the participants will be provided with paper and a variety of materials such as graphite, ink, and charcoal. They will then be asked to create drawings from the beach however they see fit. This could include the use of the sea water, rubbings, printing etc. This method of recording patterns, though simple, is effective in allowing the participants to visualise the coastline at a primitive level.

Giulia Gentili (*1994) was born in Rome, Italy. She is currently based in Edinburgh, Scotland where she graduated from Edinburgh College of Art, University of Edinburgh with a Fine Art MA (Hons) specialised in sculpture and contemporary art theory. She was shortlisted for the Astaire Prize 2017 and was awarded the Graduate Studio at Edinburgh Sculpture Workshop where she is currently based. Giulia Gentili was the resident artist at ØY Festival 2017 in Papa Westray, Orkney and will be exhibiting at the Royal Scottish Academy as one of the New Contemporaries in March 2018.