Tom Hackett proposes to apologize to the Universal Seas on behalf of humanity for the appalling state of plastic pollution. The artist will do this in two ways, visually through artworks in the exhibition and through directly speaking and apologizing to some of the seas themselves.

Firstly, he will design and print seven beach deck chair fabrics creating a deckchair for each of the seven seas that define the edges of Europe. The Baltic, The North Sea, The Atlantic, The Mediterranean, The Adriatic, The Aegean and The Black Sea.
Each design will contain the name of the particular sea, block images of fish and maritime life that live there, images of plastic bottles and collected data which relates to plastic pollution specific to that geographic locality. The fabrics will be bright and cheerful to fit a recreational beach aesthetic and employ meandering typography but will contain clear messages about the problems we face, counterpointing the attractive appearance with the hard facts.
(See indicative sample for the Baltic).

If chosen, Hackett says that he will make an initial three deckchair forms for the first exhibition in Oronsko, Poland, then develop the remaining four for October in Budapest, Hungary. As well as the information they will include written words of apology.
At the exhibition, they will be exhibited in a curved arc shape. For the final show, the work will have the seven-deck chairs and also a sound collage collected from the three actions along with found sea sounds and spoken apologies from the artist and people he talks to during and between the three public actions. 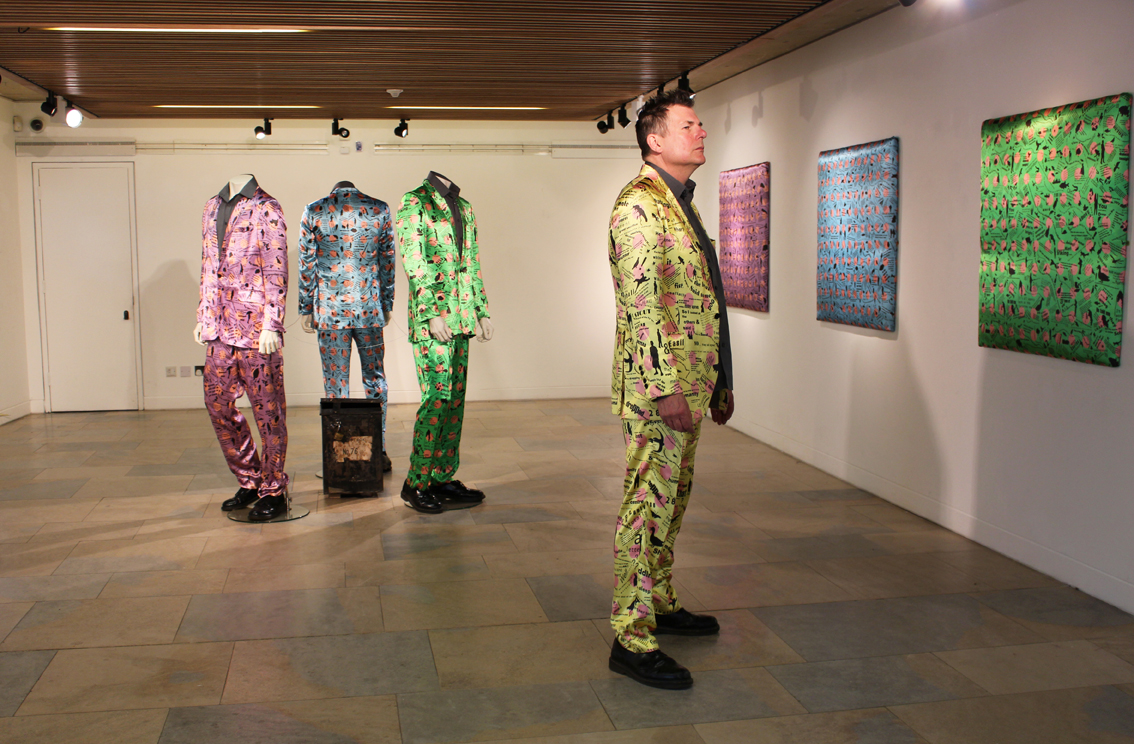 For the ‘Three Actions,’ Hackett will travel to three different European coasts, equipped with a deck chair and a megaphone. He will pick a public location on the beach and spend a day, reading out the information collected and making an apology to that Sea on behalf of all humanity. This will take place at regular intervals and attract curiosity.
It will include short phrases in different European languages. In between the megaphone slots, the artist will talk to those he meets and invites them to make their own apology on behalf of consumer society. These will be written down on an individual paper flag which will then either be planted temporarily on the beach or become a part of the final exhibition and recorded with a voice recorder.
Tom Hackett proposes to do this in Helsinki, in Amsterdam and in Penzance, England. The words collected will be incorporated into the Three Deckchairs for The Baltic, The North Sea and the Atlantic Ocean. The other four deckchairs will comprise data and images researched about each sea/ The project will encompass a degree of visual absurdity with a serious underlying message, that we all have to take personal responsibility to halt plastic pollution and to question and change our modern day consumer habits.

Biography:
Tom Hackett was born in Cambridge England in 1961 and studied Fine Art at Middlesex University and Nottingham Trent University where he completed an MA in 1995. His work has been exhibited widely in the UK with solo exhibitions at venues including The Collection, Lincoln; PM Gallery, London; firstsite Colchester, BAC London; Aberdeen Art Gallery, Edinburgh College of Art; Chapter, Cardiff; MAC Birmingham; Rugby Art Gallery; UH Galleries, Hatfield; Angel Row Gallery, Nottingham, RED Gallery, Hull and 20-21 Visual Arts Centre, Scunthorpe.
Hackett has also been included in various group exhibitions internationally in Europe and North America. Currently, he lives and works in Nottingham, where the artist also writes and lectures about art. The artist projects have received regular support from Arts Council England. Tom Hackett was recently described in The Guardian newspaper ‘as a worthy daydreamer of poignant absurdities’ by Robert Clark.
The artist’s activities as an artist regularly involve responding to places and dialogue as a departure point for creativity. His recent project ‘Conversation Piece’ 2016-17 took place in Lincoln, Nottingham and Corby, where incidental conversations with people about lives and places became ‘Conversation Suits’, a takeaway newspaper and an audio work of re-voiced conversations. ‘Shaggy Dog Stories 2014-15, involved making and walking sculptural dogs in wheelbarrows, turning conversations with people Hackett met into a takeaway newspaper and exhibition. The artist sees art as a verb, not a noun.