The pure water of glaciers and of polar ice sheets is melting and turning out to polluted seas. This irrevocable process is due to climate change and CO2 pollution and is declining pureness as evoked in Stefano Cagol’s artwork “The Ice Monolith” by: a block of ice of the Alps melting in Venice.

Stefano Cagol – invited by the National Pavilion of the Maldives at the 55th Venice Biennale – chose to use ice (an element very present in the recent art history) for the first time to speak of water in the Anthropocene context, obtaining great attention from the public and from the media – from the BBC to The New York Times. 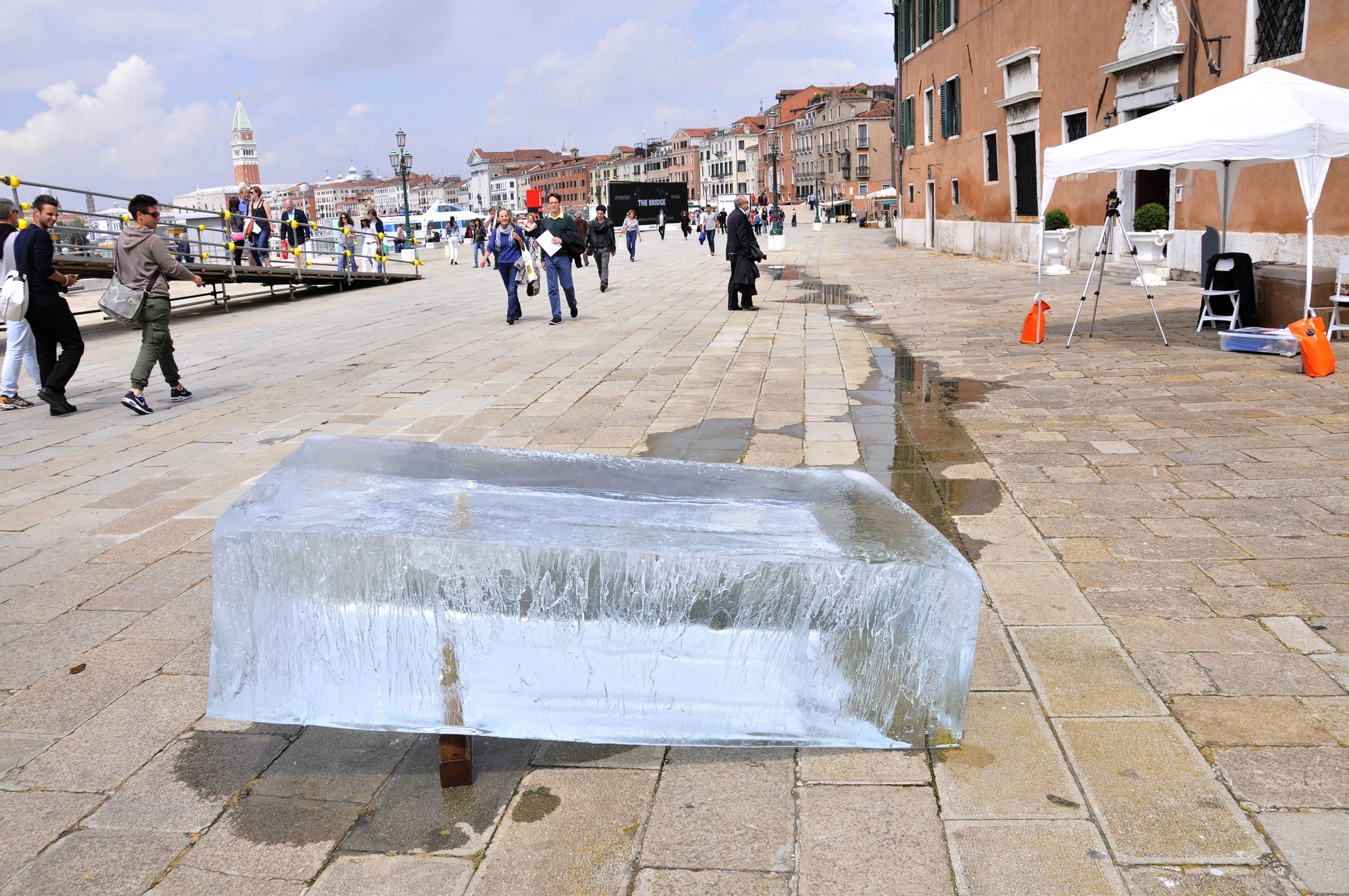 He installed a block of ice, bringing it from the Alps to Venice and letting it melt on the street along the shore, under the eyes of the passers-by in a process that lasted 72 hours and has been documented by a continuous video shoot. He was influenced by his personal experience, from the fact that he was born in the Italian Alps and his father used to show him the glaciers, called “eternal” and now about disappearing; he created a metaphor for a phenomena happening far away from our eyes, an act of aesthetic and emotional impact aimed at a large audience, to attract attention and stimulate reflection for a change.

The artwork was conceived as a touchable installation in a public space that can both be presented again on a site-specific way and through the video documentation on a 7 mt base projection. The video can be shown as a short version of a few minutes or as a premiere of the complete version lasting 3 days, continuously day and night, so creating a sort of happening open to the public. Then the artist wants to focus on temperature – of ice, of water, of plastic and the human. He plans to use an infrared camera in participatory performances developed in progress on a site-specific basis. During previous experiences, the artist involved the audience of museums, hundreds of university students and single visitors; on this occasion he will ask the public to interact with the environment and to experiment the change/exchange of heat, always facing the metaphorical concept of pure ice vs dirty water …

Stefano Cagol (1969, Trento/Italy) is an Italian artist. He received a postdoctoral fellowship at Ryerson University in Toronto. His recent participation include the exhibition of the German Ministry of the Environment for the UN climate change conference COP 23, the inaugural exhibition of Haus Mödrath in Cologne (until November 2018), Manifesta 11 and the National Pavilion of the Maldives at the 55th Venice Biennale, in which he participated with a project on climate change. His latest personal project was presented at MAXXI in Rome, Museo Madre in Naples, ZKM in Karlsruhe, Folkwang Museum in Essen, Landmark / Bergen Kunsthall. The magazine Forbes has recently dedicated a page to him and his works are part of the collections of museums such as Mart, Museion and Museum Folkwang. He won the Innogy Foundation Visit Award with a project on energy and its social value and the Terna Prize for Contemporary Art.

In his research, Stefano Cagol addresses the relationship between man and the environment in the Anthropocene era, touching themes such as the influence and control of the media, the changing of beliefs, the persistence of symbols, the balance between different senses of belonging, political boundaries, natural boundaries, mental boundaries, using video, installation and performance, but also experimenting with the use of technological means, new ways of involving the public and the modus operandi of the journey in the realization of projects extended and multi-faceted.

4 Replies to “The Ice Monolith – by Stefano Cagol”