Invasive Medusae is a work in progress that aims to draw attention to and facilitate action against the proliferation of plastic waste and its unbalancing effect on our oceans. It consists of a growing series of a specimen like jellyfish forms documenting, with the cyanotype photogram technique, waste plastic removed from the environment. This technique was first used in the 1800’s by botanist and pioneer of early photography Anna Atkins to document natural plants that she observed in her local environment. Two hundred years later, the artist Rachel Thomson is documenting and exhibiting the ubiquitous waste plastic that the artist comes across.

A plastic bag caught in a tree is now clearly a 21st-century motif and hard to ignore as if the wind and the trees are flagging up our consumerist stupidity. Thomson has been following the debate about how to tackle the swamp of plastic that is currently swirling around in the ocean’s gyres, it is estimated to be between 4 million and 12 million metric tons a year, and set to double every year. The two most common types of plastic in the ocean being polyethene (PE – plastic bags and plastic bottles) and polypropylene (PP – bottle caps, fishing gear). 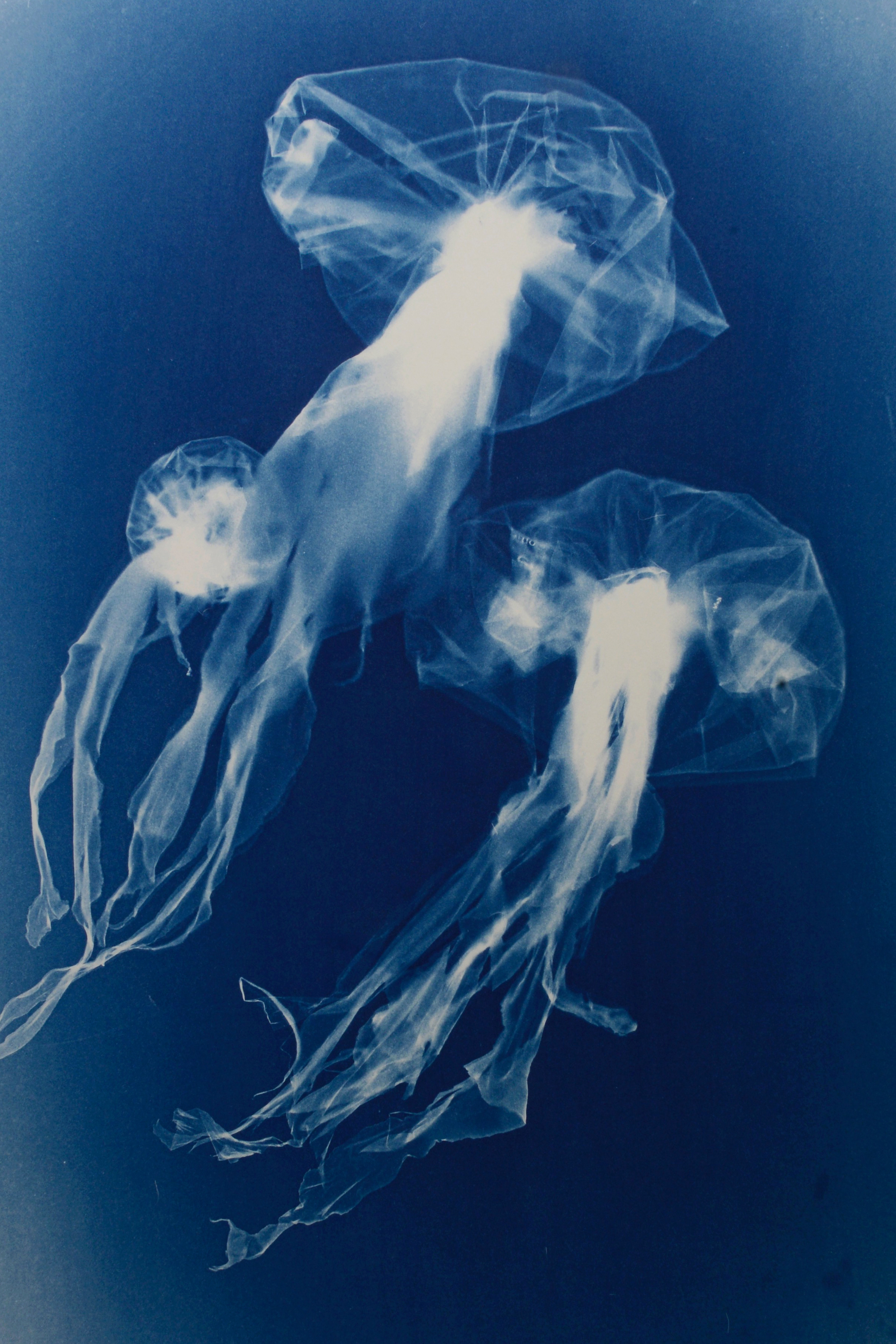 This waste is even more insidious for being out of sight. Plastic bags are regularly found in the stomachs of dead turtles, whales and other sea animals who mistake them for jellyfish and eat them. An increase in jellyfish has been linked to the warming of the oceans and a decrease in natural predators due to pollution. “So often our singular efforts to rid our environment of this sinister new species seem futile; so what if I’ve removed one plastic bag from a tree or the sea today in the name of art?!  – they are still being produced at a rate of five billion a year…” says Thomson. The artist is encouraged to discover that as far as direct action is concerned, apart from boycotting plastic altogether, some experts believe it would be more effective for us as individuals to remove plastic from trees and beaches rather than invest in ocean harvesting i.e dredging the waste mechanically.

Providing an enjoyable and creative opportunity for getting people engaged with the issues and to reduce and remove plastic from their local environment is my intervention aim. An introduction to my work and techniques will be made in free drop-in workshops to be held on three of the most polluted beaches in Europe. Participants will be invited to have a go at making their own cyanotype photograms of jellyfish from plastic rubbish that they have collected up.
The making of the artwork requires working outside, relying on the elements of sun and wind.
The technique abandons all the formality and accuracy associated with photography and encourages spontaneous experimentation.

The results are surprising and unpredictable and you need that excitement to make art! Jellyfish are an easily recognisable, universal form, in the workshops, the artist hopes not only to convey an environmental message but also excite the imagination and provide creative enjoyment for all ages and abilities.

Rachel Thomson has a BA Hons in Fine Art specializing in Photography and Print Media from The London Institute Central St Martins College of Art and Design Her environmental cyanotype photograms have been exhibited in Jellyfishsmack COS Artwalk 2013 and she was awarded the public vote prize in the Photogram Open, Urmson & Burnett Gallery, Salisbury, UK and Silverprint Gallery London in 2014. Selected shows include Market Sundries in the East London Festival of Photography in 2015, Surface and Light with The Archive Gallery, The Mill Co Project, London and the international open call exhibition Of the Sea, No.1 Smithery Gallery, The Historic Dockyard Chatham. In 2016 she was commissioned by Nottingham City Council to create Jellyfish Bloom an installation for the public LightNight event Her work has been published in The Earth Issue 2017 and appears in the Amber Lotus 2018 Environmental Art calendar.