The idea for the Ocean Cleanup first appeared when in 2013 the then 16-year-old Boyan Slat was scuba diving in the Mediterranean Sea and was surrounded by plastic instead of fish. After intense studies and a very successful crowdfunding campaign, the first prototype was tested in the North Sea in 2016. Read his story HERE!

Finally, and we are super excited, the Ocean Cleanup system is finally ready to be applied for the first time. On Saturday, 8 September, the cleanup system is going to be launched into the Great Pacific Garbage Patch – which is the largest Garbage Patch and located between Hawaii and California (and hopefully in the four others afterwards) to help clean our oceans. The trash that has been accumulated in these patches left there is already impacting our ecosystems, health, and economies. And the consequences are hard to predict. Wanna know where they are going? HERE you find out!

As conventional methods like vessels and nets are not sufficiant enough to clean our oceans from the Garbage Patches, The Ocean Cleanup invented a technology which can collect more plastic quicker and cheaper. The system of The Ocean Cleanup is supposed to remove half of the Great Pacific Garbage Patch in just five years. Can you imagine? Wow, what a great initiative! Check it out HERE! 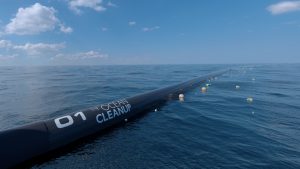