Who owns the ocean? And who governs the global seas?

NTU CCA Singapore, the Centre for Contemporary Art,  currently presents The Oceanic. The exhibition shows large-scale human interventions in the ecospheres of the ocean and addresses various ecological urgencies affecting the ocean and its littorals as a habitat as well as specific aspects of sea governance. The work of twelve invited artists, filmmakers, composers, and researchers contribute to both the long cultural histories of Pacific Ocean archipelagos and their current conditions.

As an ongoing research initiative into pressing environmental, economic, and socio-political concerns of Thyssen-Bornemisza Art Contemporary–Academy’s (TBA21–Academy) The Current, Ute Meta Bauer has curated the project’s first cycle of expeditions from 2015–17. Joining her and the expeditions on TBA21–Academy’s vessel Dardanella to Papua New Guinea (2015), French Polynesia (2016), and Fiji (2017) the featured contributors in The Oceanic are The Current Fellows.

From 25 – 27 January 2018, on the occasion of the exhibition and coinciding with Singapore Art Week 2018, The Current Convening #3, conceived by Ute Meta Bauer, Markus Reymann, Director of TBA21–Academy, and Stefanie Hessler, Curator of TBA21–Academy holds conversations, roundtables, workshops, performances, and screenings. The event will focus on modalities of exchange and shared responsibilities, while addressing the rights of nature and cultures. 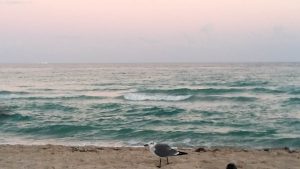 Excerpt from the press release:

The expedition to Papua New Guinea, with Laura Anderson Barbata (Mexico/United States), Tue Greenfort (Denmark/Germany), Newell Harry (Australia), and Jegan Vincent de Paul (Sri Lanka/Canada) took as a starting point the concept of the Kula Ring, a ceremonial exchange system practiced in the Trobriand Islands. The second excursion, to French Polynesia, titled Tuamotus, the Tahitian name for distant islands, included Nabil Ahmed (Bangladesh/United Kingdom), Atif Akin (Turkey/United States), PerMagnus Lindborg (Sweden/Singapore), and Filipa Ramos (Portugal/United Kingdom). The atolls Mururoa and Fangataufa were the sites for 193 nuclear tests between 1966 and 1996, despite being declared a biosphere reserve by UNESCO in 1977. Coinciding with the 50th anniversary of the first atomic weapons test on Mururoa, then considered a French colony in Polynesia, this expedition discussed the still neglected long-term impact of nuclear experiments in the Pacific on the populations and the environment. On the third and last expedition of this cycle, the Fijian practice of the Tabu/Tapu, where a community chief demarcates something as “sacred,” or “forbidden,” continued the enquiry on the Polynesian Rahui—a traditional rule system that in recent times became significant for marine conservation and resource management. This journey to the Fijian Lau Islands was joined by The Current Fellows Guigone Camus (France), Lisa Rave (United Kingdom/Germany), and Kristy H. A. Kang (United States/Singapore). Participating in all three expeditions was Armin Linke (Italy/Germany), who not only documented these journeys with his camera, but also questioned the role of image production in such unique yet loaded encounters.

The interest in exposing the technology behind the human infrastructures is shown in Armin Linke’s video installation OCEANS – Dialogues between ocean floor and water column (2017) while Tue Greenfort explores complex ecosystems and scientific production practices, challenging human understanding of and relationship with nature and culture.

Inspired by the materials used for gift exchanges such as the Kula Ring, Newell Harry documents this practice in his black-and-white photo series (Untitled) Nimoa and Me: Kiriwina Notes (2015–16), and also creates (Untitled) Anagrams and Objects for RU & RU (2015) with text on tapa, a cloth made from softened bark. Likewise incorporating items by artisans from Milne Bay Province, Laura Anderson Barbata produced striking costumes for the performative piece Ocean Calling (2017), created as part of TBA21–Academy’s intervention on World Ocean Day 2017 at the plaza in front of the United Nations Headquarters in New York.

Addressing the exploitation of finite resources, Nabil Ahmed collaborates with other researchers to call for an Inter-Pacific Ring Tribunal (INTERPRT) (2016–ongoing), a long-term investigation into environmental justice in the Pacific region. Lisa Rave’s film Europium (2014) investigates this rare eponymous mineral that has become one of the allures of deep-sea mining—the new gold rush spreading across the global oceans. In Europium, Rave also draws the often-invisible connections between colonialism, ecology, and currencies.

The exhibition also includes a sound component by PerMagnus Lindborg who recorded the land and underwater soundscapes of the Tuamotus in French Polynesia, as well as a film programme selected by Filipa Ramos and other The Current Fellows. Jegan Vincent de Paul expands his research on socio-economic networks into the Pacific region. In The Lab, the Centre’s project space, anthropologist Guigone Camus displays documentation from the Fiji expedition, as well as diverse materials from her extensive research in Kiribati, while Kristy H. A. Kang reflects on her experience in Fiji through an iterative installation and research process that will explore vernacular forms of mapping cultural memory and spatial narrative.

The Oceanic marks the start of NTU CCA Singapore’s new overarching research topic CLIMATES. HABITATS. ENVIRONMENTS., which will inform and connect the Centre’s various activities—ranging from research to residencies and exhibitions—for the next three years. This is the third exhibition by the Centre, following Allan Sekula’s Fish Story, to be continued (2015) and Charles Lim Yi Yong’s SEA STATE (2016), to feature long-term, critical enquiries by artists about the radical changes for communities whose livelihoods are inseparable from the sea, the precarious labour at sea, and the irreversible impact of technologically driven human interventions on one of the Earth’s most precious resources, the ocean.

Like to hear more about this amazing exhibition, then go to their page HERE.