We have 2 weeks to go before the book launch of our guide. We want you to know exactly what to expect from the book and to get to know the amazing people behind this project! Every week you will be able to check in on our website in order to find a new essay, article, artist or business from the guide.

This Weeks excerpt is focused on Robertina Šebjanič, who is working in the cross field of art, technology, and science. Her research focus for several years has been dealing with cultural, (bio)political, chemical and biological realities of aquatic environments. She was one of the five selected artists of mobile residency of The Universal Sea. The Universal Sea guide features both her artwork (an audio installation) and an essay she wrote. Robertina currently lives in Ljubljana, Slovenia.

Aquatocene / The Subaquatic Quest for Serenity investigates the phenomenonof underwater noise pollution createdby humankind in the seas and oceans.The sound compositions are a re-mix between the bioacoustics of marine life (shrimps, fish, sea urchins etc.), the aquatic acoustics, and the presence of human generated noise in the world’soceans and seas. The audio compositions of the subaquatic soundscape encourage us to reflect upon the anthropogenic sonic impact on the underwater habitat and marine life, as well as illuminate awareness and underscore the importance of maintaining safe sound environments for animals living in the world’s water habitats.

Over the last few years Robertina has made a number of recordings using hydrophones (underwater microphones) in different locations around the globe. In 2018 the artist was selected by The Universal Sea for an artistic residency. During the residency Robertina visited numerous locations in her quest for underwater serenity. She presented audio visual performances, exhibitions, and workshops, as well as filing and recording underwater soundscapes for her project Aquatocene. Locations included Corfu next to the Aegean Sea, Dubrovnik andPoreč by the Adriatic Sea, Amsterdam at Markermeer and many more.

Despite the broad availability of popular aquatic sounds, we aren’t really aware that the underwater soundscape is as rich as the one heard by terrestrial creatures above water. Aside from lacking experience in terms of the fascinating diversity of marine sound, we are also not aware that noise pollution caused by humans is already changing the soundscape of the waters and even the communication of its inhabitants.

Sound is the main communication tool for most marine animals and plants that dwell in the deep darkness of the world’s oceans and seas. Despite widespread knowledge of certain aquatic sounds,like those produced by animals such as whales, the public is predominantly not aware that the underwater soundscape is as rich as our terrestrial one.
Beyond lacking experience of the diversity of marine sounds, people are often unaware of the fact that sonic pollution caused by humans has already profoundly changed the soundscape of waters, to the point where natural communication of marine animals is being largely disturbed. Today, man- made noise causes severe disruptions in subaquatic habitats with huge consequences for marine life.

With the audio compositions of subaquatic soundscape, the Aquatocene 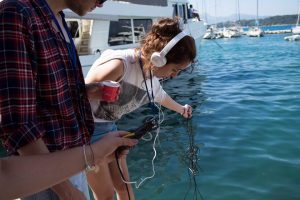 project reflects upon the anthropogenic sonic impact on the underwater habitat and marine life as well as it raises awareness and underscores the importance of preserving safe sound environments for animals living in the world’s oceans, seas, lakes and rivers.

In the past couple of years I have spent a lot of time on the sea researching the impact of man-made noise on underwater habitats. I have been working in the Mediterranean Sea, Adriatic Sea, North Sea, and Atlantic Ocean, using hydrophones (underwater microphones).

For most of the people being next to the sea, swimming in the water and relaxing on the shore, the presence of water triggers a sense of serenity. It was the same for me, but this changed dramatically when I started to record underwater sounds. The extent to which the sound penetrates into water habitats completely surprised me.

It turns out that nowadays man-made noise is undoubtedly omnipresent in the subaquatic environment.

My expectations of underwater serenity were fundamentally challenged. Everything else was present except the silence. Sound travels across water much faster and also much further
than, for instance, across air, which is also the reason why sound is the main communication tool for so many marine species. Light is only present on the very surface of the sea (in the upper 200 meters) while in deeper areas light disappears and gradually turns into deep darkness.

The human presence manifested through technological devices such as boats, sonars and sound cannons (when looking for oil) is most often highly disturbing for animals. It scares and confuses them while navigating across the ocean. These invasive sounds can easily overpower their communication abilities and therefore animals try to avoid them, often with drastic consequences.

These facts encouraged me to begin an ongoing investigation into subaquatic sound pollution. Field recordings capturing underwater sounds began in 2014 during my residency in Izmir, Turkey, where I took part at the Port Izmir triennial, curated by Saša Nabergoj and organised by K2. My aim was to record the sounds from swarms of jellyfish in the Gulf of Izmir. In the beginning I tried to delete the “techno presence” of man- made sounds which have been present in most of the recordings.

But the more I recorded and listened to the material, the more I realized that man-made noise is the sonic reality of today’s ocean—in the same way as it dominates the terrestrial soundscape.

When recording with hydrophones and preamplifiers I try to practice a non- invasive way to interact with marine life. Therefore I also conduct workshops on how to build DIY hydrophones through which I tend to bring pressing issues of ecology closer to the wider public. Dropping a hydrophone into water during workshops is always an eye- opening moment for participants when they experience the scale of underwater sounds.

My artistic practice exists on the intersection of cultural, (bio)political, chemical and biological realities of aquatic environments which serve as starting points to investigate and tackle the philosophical questions in the fields of art, technology, and science.

and also in the final representation of the projects. From the point of view

of art, it is important to discuss the dominant scientific narratives and the way they shape our realities. To find a good equilibrium, it is essential to compare science to artistic and philosophical narratives and not only analyse reality through statistics. For me it is imperative that I integrate and merge disciplines such as art, science, and technology.

Combining different disciplines can be very challenging and rewarding at the same time. Each of my projects involves a unique specific research process. The most difficult thing is to figure out basic parameters even before the process starts. Once the concept and the methodology of the research are clear, nearly half of the work is done.

When it comes to exhibitions, I always try to avoid simplifying the scientific research behind the project. This is the reason why I often organise symposiums to accompany my exhibitions and audio- visual performances. These events open up the topic and hand over the podium to all agents involved. I strongly believe that, alongside scientific research, it is highly important to pose ethical and philosophical questions as well as to understand current (bio)politics of the world we are living in.

In the past years I noticed a strong empowerment of citizens’ science as well as an increasing number of scientific papers giving open access to their published articles. Knowledge should be accessible to everybody, not only to the privileged.

With my new project aqua_forensic (in collaboration with Gjino Šutić, produced and supported by Ars Eletronica, Project Atol and Ur Institute) we are working on other levels of pollution, such as focusing on the invisible anthropogenic pollutants in water habitats. Invisible chemical pollutants (such as legal and illegal drugs—mood controllers, antibiotics, antimycotics, painkillers, hormone pills) are the residue of human consumption discharged into underwater habitats.

During two residencies in the summer of 2018, first one in Linz, Austria exploring the Danube River and the second one in Dubrovnik, Croatia exploring the Adriatic Sea, we have been working with research about the presence of pharmaceuticals in waters. Furthermore, we are hoping to conduct similar research in other locations around the globe.

What drives my interest in this topic is that water is a fluid environment. Any changes to it would influence us all, for instance the phenomenon of plastic waste and plastic micro-particles that penetrate back into our food chain in an ongoing loop. We live in the period of Anthropocene where humans are consistently “terraforming” the land and “aquaforming” the waters. The environmental issues that we are facing are a complex combination of socio- political and economic relationships. Empathy and solidarity towards the environment are key ingredients for how to change them.