The Thames derives from the Celtic word tame, meaning ‘dark water’. London’s river has been characterized as a sinister artery throbbing through the heart of the city, absorbing the relics of everyday life in its murky waters. The river is darker than ever. Increasingly, these objects are plastic – a side-effect of our culture of mass consumerism. All rivers lead to the sea; the plastic detritus that clogs up the Thames eventually finds its way into our oceans. Living and working in London, I am interested in, yet terrified by, this trajectory of rubbish.

Rachael Causer’s work is rooted in a love of objects and materials. As a child, she was always finding things to make mini museums with. She collected bottles, postcards, rubbers from pencils and used stamps. Over the years this has become collections of lone gloves, deflated balloons, rubber bands dropped by postmen and found notes that afford glimpses into strangers’ lives.

After this ‘hoarding’ became impractical, Causer began using photography as a way of collecting instead. Taking pictures of reflections in puddles records transient moments of beauty that last for a second while the sun is out. The artist photographs lost objects – dropped toys, single shoes or solitary cardboard boxes. She is drawn to objects perceived as worthless or broken and use very humble materials in my work – stitching tea-towels, dishcloths and socks.

Rachael Causer’s work called ‘A Daily Mend’ consisted of mending something every day for six weeks. Sometimes the mends were practical, fulfilling a direct need for fixing a broken cup.  Others were apparently useless such as the darning of a hole in a plastic carrier. For her, there is a serious point to these ‘useless’ mends. They challenge our throw-away culture, obsessed with continually acquiring and upgrading things. Kintsugi is a Japanese art where a broken pot is mended and its crack filled with gold, highlighting the object’s aging, history and rich patina as a mark of resilience. It is more beautiful because of its flaws; its wear and tear. This is a powerful idea and one we can learn from.

Her work appreciates the emotional investment and time spent in repairing the objects we own, particularly the overlooked everyday items that we might easily throw away and replace. Taking the time to repair such objects benefits our mental health: the repetitive act of stitching affords a slowing down of time and space for reflection. Mending becomes empowering.

She recently moved to a studio by the river, at a wide and expansive part overlooking the Thames Barrier.  She watches the continuous to-ing and fro-ing of boats past my window, hearing the drone of dredgers, the creaking of shipping containers and the clinking of cranes and heavy machinery. Like the tide of the river, London is constantly growing and expanding.  New structures are squeezed into its cracks; old scars of its past are revealed and then built over. This perpetual shifting uncovers and recovers gems from the past, not unlike the objects washed up on the Thames’ shore. 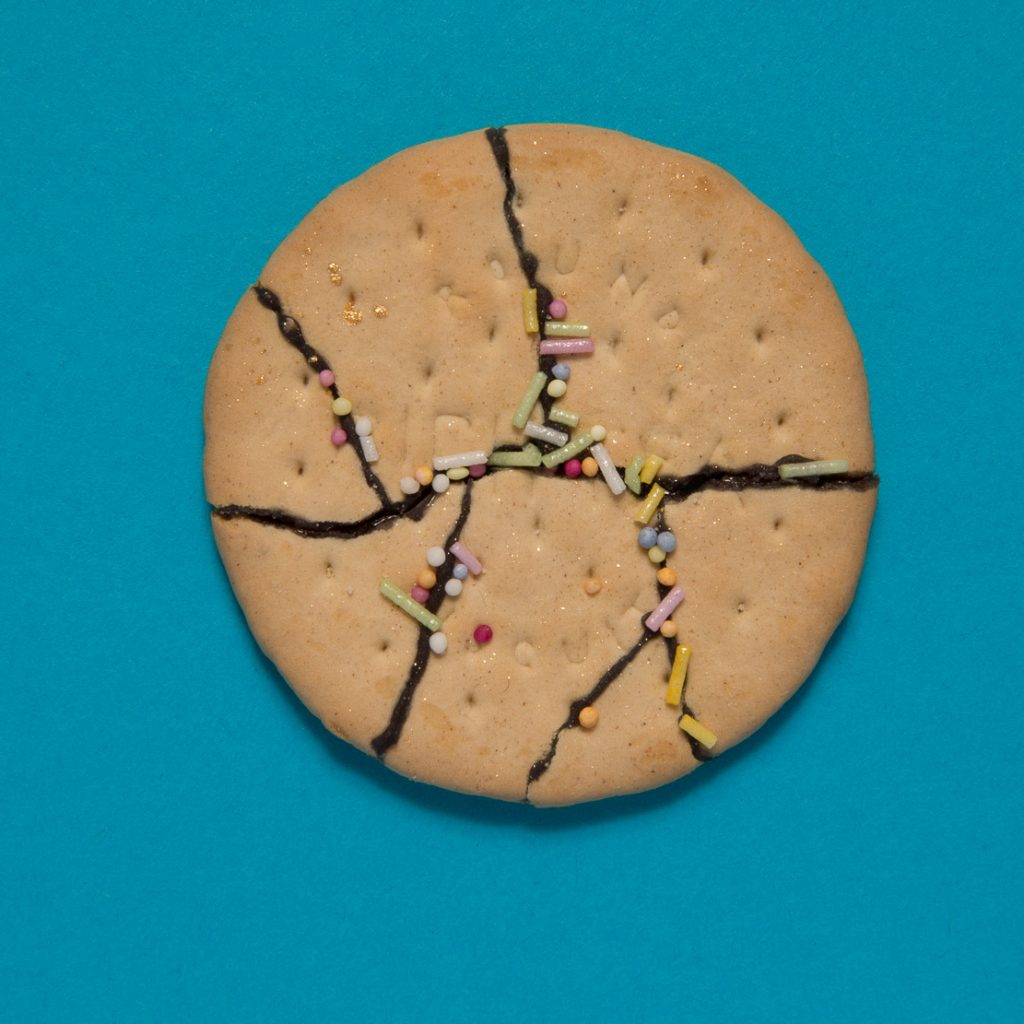 Walking along the Thames pathway, she traces the shoreline at low tide in search of these gems. There are bits of 400-year-old clay pipe littered across the beach like Elizabethan cigarette butts. Mudlarking: scavenging in the river to find objects of value. In past eras, this would have meant searching for anything that could have been sold on to grub a living. The value that mudlarkers look for nowadays is cultural, the detritus from history. These are ordinary things – pipes, shards of pottery, buttons – giving insight into past lives. Carrier bags, water bottles and shrink-wrap packaging overwhelm these historical relics.

It is depressing to think that this plastic landscape will be the picture that remains of our generation for a future mudlarker.

“Of the five trillion plastic bags produced each year, we use each one for an average of 20 minutes. It will then take a 1000 years to decompose.” Rachael Causer

The work ‘Flotsam’ is one of a series of mono-prints of discarded plastic carrier bags that she’s picked up whilst walking along the river. Causer is fascinated and repelled by the physical trail that we leave behind us. It’s a complicated relationship; she finds the images hauntingly beautiful and yet hugely disturbing in their repercussions for our tenuous ecology. The floating plastic bag is both fragile and indestructible. The mending of plastic bags, whilst beautiful, is a useless endeavour; unlike a sock or a pillowcase, plastic cannot be repaired.

If selected to be one of the finalists to the Universal Sea, Rachael Causer proposes the following 3 actions, using art as means to increasing awareness of the issue of plastic and water pollution.

A workshop exploring creative ways to darn a single symbolic sock. Participants would be required to bring with them a single sock with a hole in it and learn how to mend it using traditional techniques of darning – a skill that, in the past, would have been necessary for all family members. Skills like this have sadly been lost or abandoned in favour of timesaving and cheap production. She suggests that the time spent mending a humble object such as the sock is valuable and worthwhile. The project would result in a photographic documentation of hundreds of mended socks and much conversation and tea drinking in the process.

Action 2 – The Litter Museum. This could take place in all the locations The Universal Sea – Pure or Plastic? travels to via an online archive.

Create an online archive of plastic. An action where participants are required to go for a walk to find and pick up at least 10 small plastic objects from beaches, pavements, street corners and parks. These objects would then be arranged according to colour, size and type, for example. They would then be photographed and uploaded to social media using #littermuseumproject, before being recycled.

Action 3 – 1000 Carrier Bags- A collaborative, socially engaged art project to take place along the river Thames, London, United Kingdom. Plastic bags would be collected and mended by children from schools around the Greater London area.

Participants would be invited to collaborate in a sculptural project where 1000 plastic carrier bags are collected from beaches. They would then be lovingly mended as a symbolic act and assembled to form a sculptural piece that simultaneously confronts established value systems and promotes the notion and validity of repair.

“I envisage the sculptural piece being an enormous washing line, stretching alongside the Thames river. The mended bags would be pegged to the line, reminiscent of the way that plastic carrier bags are snared in hedges and fences.” Rachael Causer

Rachael Causer studied Fine Art at Central St. Martin’s from 1991 to 1994. Since leaving St Martin’s, she has exhibited her work regularly and worked across a variety of socially engaged contexts, including schools and, most recently, a residency at the Tavistock and Portman NHS Mental Health Trust.