“Today we live in a global environment that has been raped, abused and left bleeding from our insatiability in consumerism and negligence that has resulted in the damage of the only place we know and have as a home.” Chriss Aghana Nwobu

Poisoned Earth is a three parts art project that will integrate performance art, short documentary video and still photography, it will seek to understand through inquiry reasons for our negative attitudes towards our environment. This project ideas resulted from my collaboration with another artist in a project titled “Rite of Becoming” a water ritual performance inspired by the song of Afrobeat Legend Fela Kuti “Water No Get Enemy” to cleanse us of our impurities and help us imbibe new ways of living by caring for each other and our environment.

Chriss Aghana Nwobu lives in Lagos a city of over twenty-two million people, it is the world’s fastest growing population at the rate of eighty-five people her hour according to World Economic Forum survey in 2016. 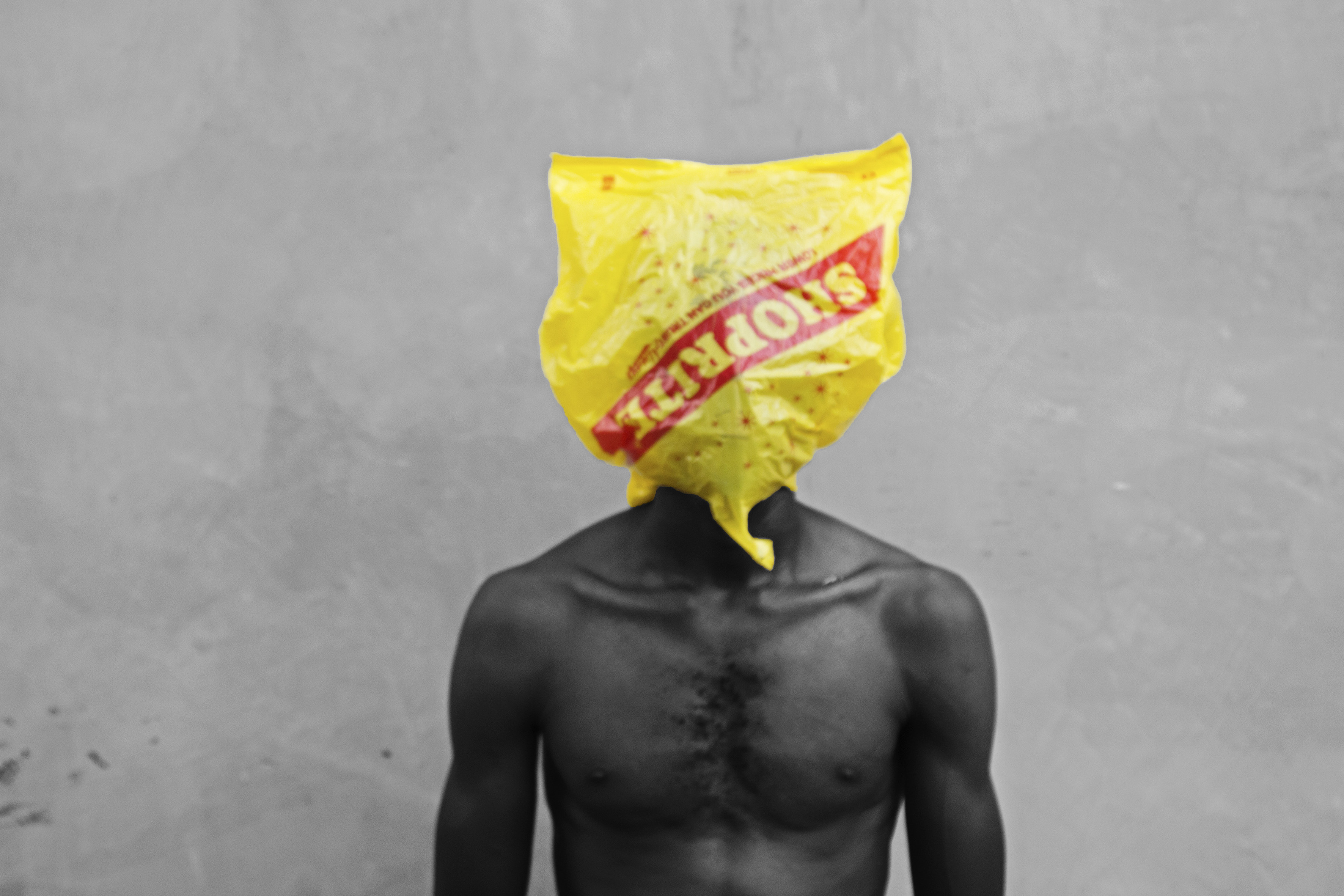 Lagos is a city of several canals flowing into rivers and lagoons and finally empties into the Atlantic Ocean taking with it all kinds of waste especially non-biodegradable materials dangerous to marine lives and the environment. As the population continues to grow, so are the waste generated which presently stands at 16 tons per day according to Lagos State Waste Management Agency. This staggering number is higher than that of many cities around the world and this solid waste consists over forty percent (40%) of non-biodegradable materials like plastic bags, water and soft drink bottles, discarded toys, car tyres, computers and all kinds of plastic related materials.

Poor or inadequate waste collection and management system also mean that most of this plastics litre the environment and finally end up in open drainages where an onward journey is continued to the sea.

This looming danger and it is a catastrophic effect from a product manufactured in as far away as China but consumed in Lagos but could end up in the shores of Europe or the Americas mean that no one is spared.

The project Poisoned Earth as an intervention through public participatory art performance to question the fundamental causes of this damages through all kinds of pollutions. It will explore the impacts of our growing consumerism as driven by global capitalism but will also be a catalyst for action through short documentary video and still photography. It will help us to rethink the future and the symbiotic relationship between humans and the environment, to cut down on the amount of waste and encourage alternative means as ways of saving and preserving the environment, especially water which in it’s purest form is one of the greatest gifts of nature to all.

The artist is truly excited about the prospects of this project, she has no doubt that it will become a voice that is going to inspire discussions but above all challenge us to do more to tackle this growing monster that threatens our collective existence.

Chriss Aghana Nwobu is a self-trained visual artist who uses photography/video, installations and performance art to communicate his ideas. A founding member of Invisible Borders Trans-African Photography Project, his works have been published in different journals. He has documented and captured African contemporary life and socio-political themes in a distinct manner.

To visually tell stories, that will add my voice to the collective narratives that will shape the history of humanity.

I have worked as self-employed artist/photographer and as project researcher, co-producer and production/logistics manager on different productions for – Vice Media. BBC, Al Jazeera, CBC Canada, Thalassa France, and Channel 4 UK – from – 2005  until date

As an artist, I am burdened with all kinds of social issues from inequality to injustice, my art is the lens through which I mirror the world through visual narratives that engages and provokes thoughts, challenging us to discuss and address such matters thereby creating paths from darkness to light which can be likened polluted environment becoming clean.