‘Involuntary Pairs’ consists of 25 frames measuring 9x9cm displayed on a wall containing two objects each, one man-made and the other one natural. Every object has been lost at sea and found on a beach in South-East Asia. Matching in pairs follows the principle of sameness, e.g. a faded cigarette butt and a piece of coral in the same shape and colour, or an orange shell and an orange bottle cap of the same size. Even though human perception recognises the pairs as same their inherent qualities could not be more different: while one originates from nature the other one is a product of human imagination and manufacturing. 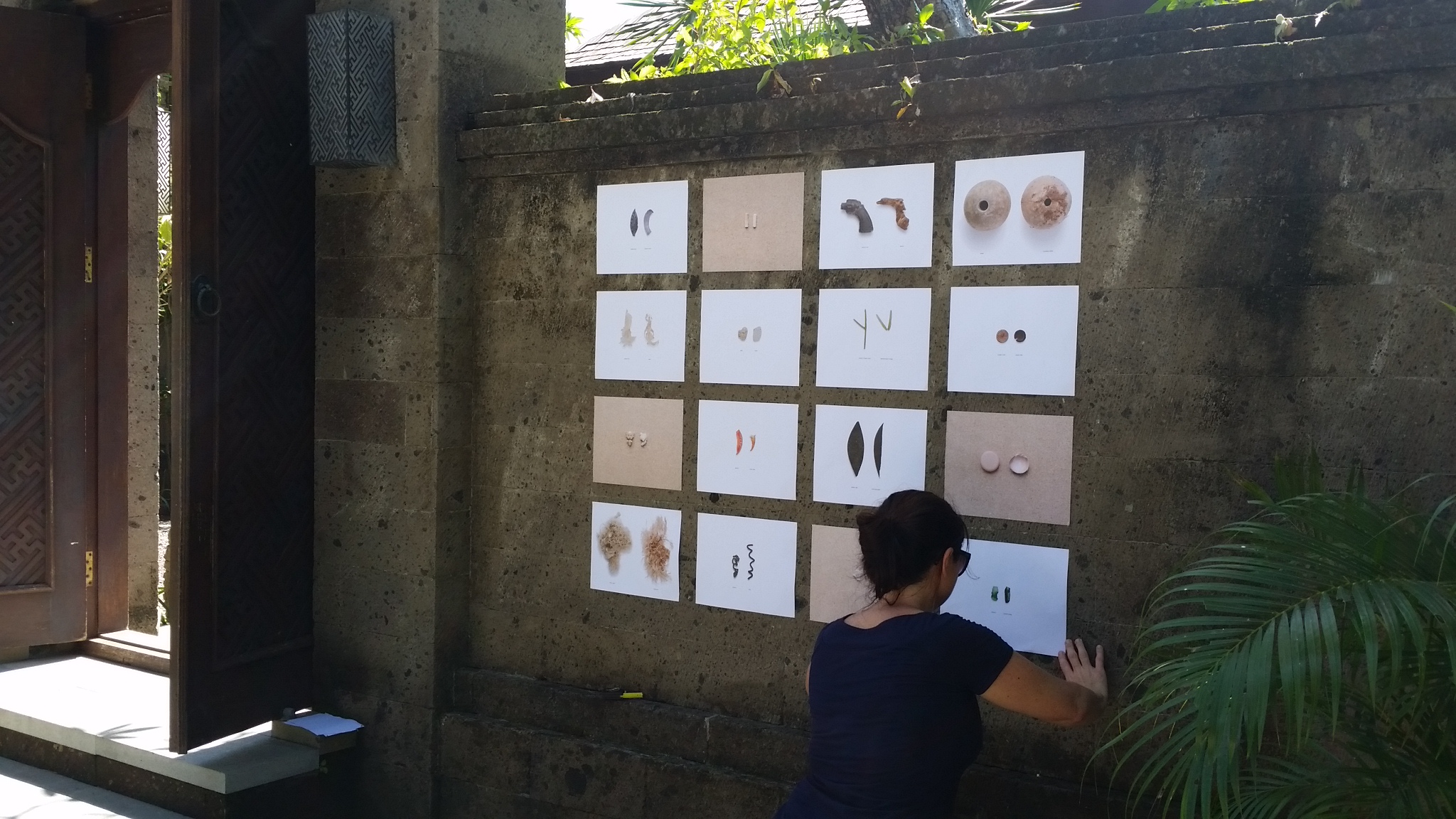 Photo above shows ‘Involuntary Pairs’ at the Australian Consulate in Denpasar, Bali

‘Involuntary Pairs’  turn a spotlight onto a seemingly small and often ignored phenomenon: the merging of man-made and natural materials to the point of inseparability. Today marine pollution gets discussed as if the ocean and plastic were two different entities. The truth Liina Klauss finds on beaches is different as ‘the polluted’ has become inseparable from ‘the polluting’. Mankind has altered the inner and outer workings of Nature to a point of inseparability. “We have never been that mighty nor that destructive…” She says. What starts as an innocent visual comparison has fatal consequences for wildlife, humans and nature as a whole. ‘Involuntary Pairs’ visualises an excerpt of a huge ecological catastrophe.

The endless mass of products from our throw-away culture has gotten out of control. Picking up litter on beaches she is constantly in touch with nature and the human leftovers therein. What the artist touches, touches her – “…that moment not only my hands connect, all of my senses and heart are being touched. Being in Nature I become like a child again: open, sensitive, innocent. The guard of criticism drops and waste simply becomes colour within a landscape, pollution becomes an open possibility.”, explains Liina Klauss.

Her personal liberation from the burden of being ‘the polluter’, of being part of the Anthropocene is her love affair with nature. It is this love that she passes on to others by bringing them out into the wild. Everything else follows naturally from this connection with nature: awareness, responsibility and action – and last but not least, art.
‘Involuntary Pairs’ is an ongoing project that she has been perusing since 2013. 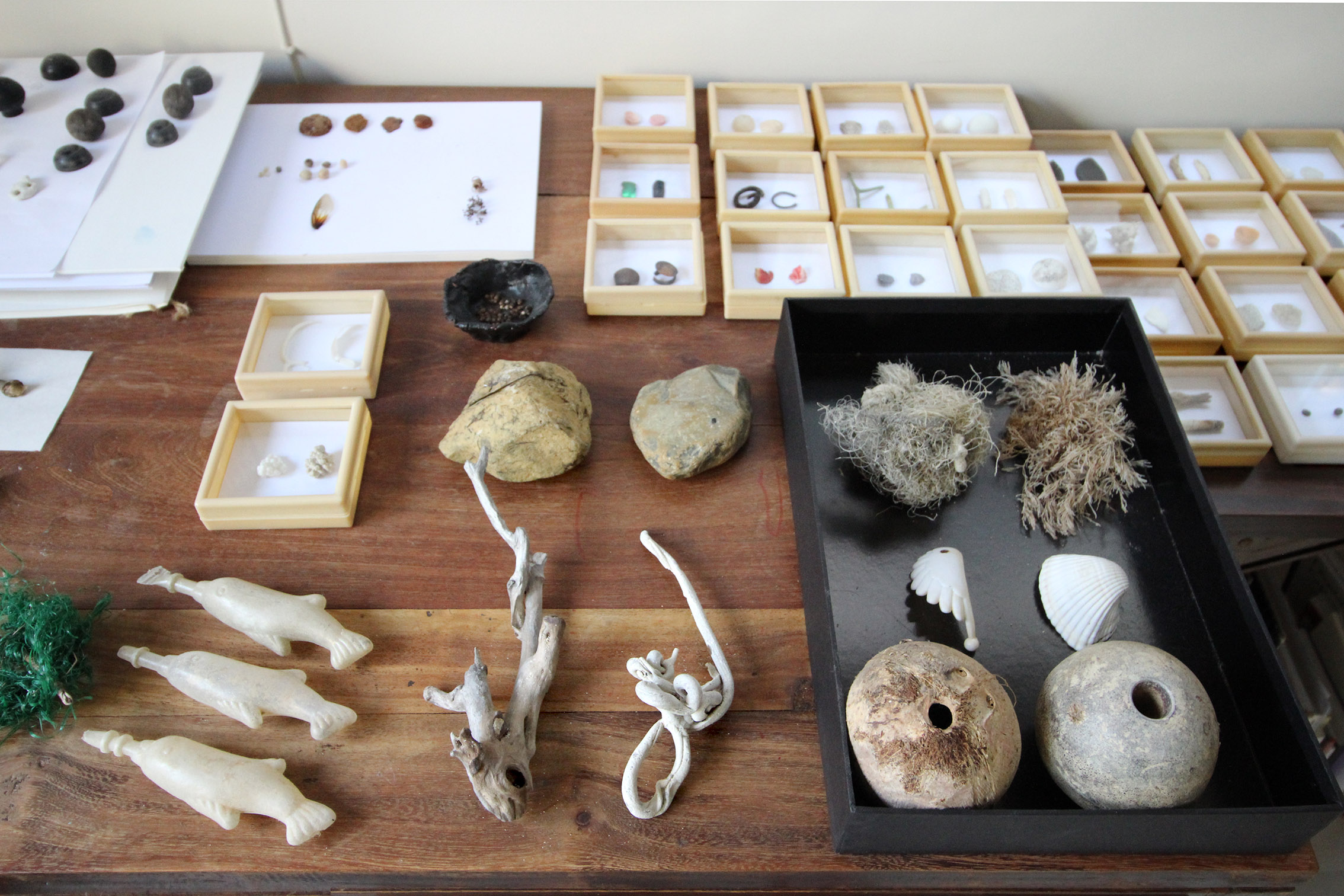 Liina Klauss was born in 1974 in Germany. She studied fashion design at the Kunsthochschule  Berlin-Weissensee. After her diploma, she worked for fashion brands like Sai-So in Berlin and Jurgen Lehl in Tokyo. Moving to Hong Kong in 2007 and experiencing the down-sides of mass-production in China made her leave the design field and seek her expression in art. Lost objects within the natural environment are the starting point for her art. In 2011 Liina started to make environmental installations on beaches using the marine litter. Today Liina creates everything from delicate mosaics to large-scale land-art.

Her main aim is to involve people of all ages and backgrounds and to get them outside, to make them connect with nature and actively participate in the art-making process. Liina collaborates with various schools, universities and corporates facilitating art-awareness-activism projects which include tracing-waste workshops and curating-the-beach outings. She is a regular participant at Microgalleries and had her first solo exhibition in Hong Kong in 2013. At present Liina inspires and is being inspired as an artist in residence at Bali Green school.

The independen filmmaker You Xue-Lin documented Liina Klauss’ work in the short film “垃圾山水 Landscape of Rubbish” in 2015 and won the New Taipei Documentary Award.

The aesthetic of these pairs lends itself to the specimen books of the 19th century when continents were discovered and then unknown flora and fauna recorded. “Where is away?” is the question that this publication wants to answer in a visually appealing and scientifically interesting way. Today the world is fully explored, mapped and connected in real-time. The magnetism of consumerism has reached the farthest corners of rainforests and solitary islands and with it an infinite avalanche of waste. ‘Involuntary Pairs’ will provide the latest information on plastics (degradability, life-span, ability to recycle, impact on gyres, landfills, incinerators etc.) as well as on plants (biodiversity, plant families and their properties, procreation etc.). Special emphasis is given to the adaptability of flora & fauna to marine litter (shells growing on plastic bottles, algae overgrowing ghost-nets, hermit-crab using plastic cap as home, plastiglomerates, etc.). The aim of the book publication ‘Involuntary Pairs’  is to showcase the status-quo of the Anthropocene Age.

Photo above shows  part of the ‘Involuntary Pairs’ collection

For this publication, I will need the help of marine biologists, chemists, laboratories specialised in plastic components, biodegradability experts and know-how from the recycling industry. A graphic designer, a stats-visualizer and a coral-expert have already accepted to collaborate. The independent publisher mccm creations from Hong Kong has given consent to publish the book.

This workshop combines realistic drawing and creative writing: We will trace back one specimen of the marine litter objects to its origins. As a first step, we draw the specimen from all angles, recording damage, weathering, signs of manufacturing, or any other finds that can lead to the provenance of the object. Like archeologists, we collect data. Later we combine these facts with fiction. The result will be a coherent narrative of how a piece of marine litter can end up in our oceans.

I have been conducting this workshop with children as small as primary all the way up to university students. It is an effective and fun way to make us think about the life-cycle of products and natural materials and creatively answers the all-pervasive question: “Why is there so much trash in our oceans?”

‘Curating’ has its roots in the Latin word ‘curare’ which means ‘to care for’ and ‘to cure’. In a modern context, the word is used in the art world describing the creative process of selecting works for an art exhibition. In my work as an environmental artist I transfer the word out of the gallery/museum into Nature: In ‘Curating-the-Beach’ I invite participants to look at their environment as if it were an art gallery. The findings on a beach range from shells to ghost-nets to driftwood to plastic. Everything is art material, no discrimination made. By simply rearranging the found objects, we can give them new meaning: Waste becomes value, ugliness becomes beauty.

This workshop can be conducted with a minimum of 10 and maximum of 50 participants. It can happen on a beach, on the side of a road, a river or a dump. Wherever we find ourselves, be it sand, concrete, grass or wasteland it will be our gallery. Whatever we find, marine litter, rocks, flowers, plastic bottles, all will be our art material. Trash is ubiquitous. And art should be ubiquitous, too!