The raw, grinding, splashing, dirty, gurgling sound at the base of Timo Kahlen’s sound installation “FOOTPRINT” is highly evocative – and quite difficult to describe. A synopsis of its emotional impact could be: “The bristle surface beneath your feet opening, breaking and tearing apart, as waves and water and debris rush into the unstable vessel. Resolute and full of life: the protagonist, vehemently gurgling water and inarticulate sound. Possible meanings concealed (withheld), contained and spluttering, gurgling inside and out.”

The corresponding photographic image, an integral part of the installation, presents an abstraction, a detail of a viscous fluid with a fragment of dark matter suspended into or projecting out of it.

The installation of sound and visual node allows for multiple and complex references – metaphors of erosion and pollution, of dissolution and instability, of fragility and chaos, of refugee crisis in the Mediterranean and radical environmental change, come to mind -, and engages the viewer to immerse in the acoustic and visual contrasts and analogies at the base of the work. 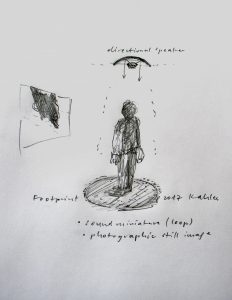 Working with sound means to sculpt emotions. And space. With intervals of several short spans of silence, the sound miniature is to be projected from two small stereo loudspeakers (focussing at ear level in the exhibition space), or – as an alternative for intimate listening – from directional loudspeakers or headphones suspended from the ceiling above (dependent on funding), in conjunction with a single photographic still image to be displayed ‘floating’, mounted in the gallery space at eye level, directly in view of the loudspeaker/headphone installation of the sound in the exhibition space.

The proposed temporary public interventions will be three sound performances in public space entitled “GURGLING (SEA WATER)”, 2018. A ‘swarm’ of three performers will carry the dirty, grinding, viscous, ‘polluted’ sound of gurgling a mouth-full of seawater into public spaces, carrying the sound along in plastic shopping bags. For the period of two hours, the swarm performers will linger and meander through hotspots of selected cities, carrying a common plastic shopping bag each, filled with one of three varying sound compositions of different protagonists vehemently gurgling water; sounds intermingling with, immersing, disturbing the passer-bys.

Upon request, the three performers will hand out small business cards, with a reference to the work, and a very short text of intent, with a link to the universal sea org website.

Preferably, the performances will be anticipated by announcements on social media or discussions with the universal sea team on local radio stations, including a short radiophonic sound miniature (ca. 60 seconds long) of “GURGLING (SEA WATER)” being broadcast on radio prior to the public interventions.

Due to numerous teaching commitments in Berlin, the three proposed actions will have to be telematics. Funding provided, the artist will share instructions and sound files/equipment (including the chosen, plain plastic shopping bags, mp3 players and chargeable Bluetooth speakers) for the two-hour performances of a swarm of three performers (preferably local, networking art students) to walk the streets of the chosen venues. All materials will be customized for the events, ready to employ. The performers will be renumerated. Timo Kahlen will not be able to attend the performances in person, yet available online for any questions related to the work.

Sound sculptor and media artist Timo Kahlen (*1966) has been creating eye- and ear-catching, temporary media sculptures and sound installations for more than 25 years. His work has received nominations for various renowned scholarships and residencies, for the German national “Sound Art Prize“ (2006), the Stiftung Kunstfonds stipend (2010), the „Supreme Concept Award“ at Kinetika 2014 (New Zealand), for the “Kahnweiler Prize for Sculpture“ (2001) and for the “Prize for Young European Photographers“ (1989), as well as critical recognition at more than 170 exhibitions of contemporary media art since the mid-1980s : including invitations to „Sound Art: Sound as a Medium of Art“ (ZKM | Karlsruhe 2012-2013), “Tonspur_expanded: The Loudspeaker“ (Vienna 2010), “Manifesta 7: Scenarios“ (Italy 2008), “Wireless Experience“ (ISEA, Helsinki 2004), “Zeitskulptur: Volumen als Ereignis“ (Linz 1997) and his solo exhibition “Timo Kahlen: Works with Wind“, inaugurating the Kunst-Werke Berlin in 1991. Timo Kahlen received his Master of Fine Arts degree from the Hochschule der Künste Berlin in 1993. He works, teaches and lives in Berlin, Germany.