In the 21st century, it’s no longer Jonah in the belly of the whale, but bottle caps, popped balloons, and shards of plastic. Ninety-five percent of the ocean has never been seen by human eyes. We’re destroying a mystery that we have not even begun to discover. Walk with us now into the “Vanishing Oceans Project” where coral reefs are replaced by plastic and glass, and the sounds of whale and snapping shrimp intertwine with engines and underwater sonar. You will be plunged into the aural and visual landscape of a dying world. Our myths, our relationship with the sea, and the sea creatures themselves become a hypnotic elegy.

The project, a collaboration of Linda Byrne’s visual art and Maggie Dubris’s sound, was fueled by our mutual concern over the massive environmental problem of plastic marine trash. We began by roughing out a concept together and doing research, then met periodically to review our individual progress and refine our vision. This installation combines two sculptural works, lights, and an original sound piece into a haunting vista of oceanic decimation. “Coral Reef” uses recycled plastic 6-pack rings as its main component. The very plastics that are polluting our oceans become the reef itself. Its translucent ghostly quality mimics a dead coral reef drained of vibrant colors. “Skeleton Ships” consists of 12 bone-like ship hulls. Their rib shapes visually echo the destruction of sea life, the fishing industry, and our coastal communities. The soundscape melds traditionally “beautiful” sounds like whale calls and sailing songs with sounds that are killing the ocean; engines, underwater construction, and sonar heard from an undersea vantage point.

Through the “Vanishing Oceans Project,” the two artists invite the public to immerse themselves in a fragile aquatic world. Today our oceans carry more plastic than plankton. Though the scope of the problem seems overwhelming, we can each do our part to help. Realizing the impact of our individual economic power, we challenge the public to consider how they live. Understanding how something as small and seemingly innocuous as a plastic 6-pack ring from a soda can, a plastic straw, or a plastic bottle directly contribute to this destruction, is the first step in bringing about changes to our personal buying and eating habits. Relying less on plastic, and properly disposing of what we do use, is critical to the cleanup of the oceans. 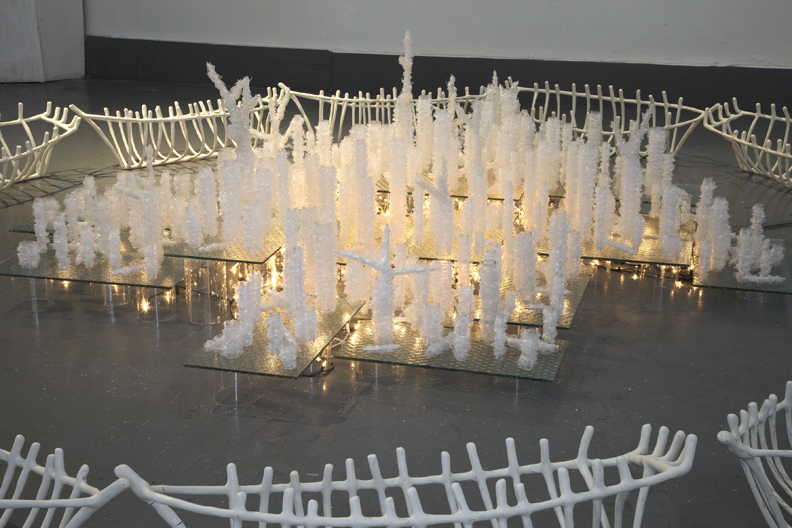 Linda Byrne was born in New York City, USA. While in high school, she was awarded an art scholarship program at St. John’s University, then majored in Fine Art at Parsons School of Design but dropped out before completing her degree to travel around the country and forge her own history. In the years that followed, Linda continued working on her craft through self-training and by taking courses at art schools and academic venues, including the Art Students League, Fashion Institute of Technology, and the Compleat Sculptor in New York, and the Academy de Bell Arts in Barcelona, Spain. She has exhibited widely over the years, recently in 2017 at the Creative Climate Awards through the Human Impact Institute at TECO in New York. Among her other shows were Cutlog Fair, The Hudson Highlands Nature Museum, Islip Art Museum and art galleries and universities in various cities across the United States. Her work was in the international travelling exhibition, “Trade Show/California to Turkey.” Linda has received many awards, grants and residencies, including a Jerome Foundation Grant, and artist residencies at both Jentel Arts and Ucross Foundation in Wyoming.

Maggie Dubris came to New York City at the age of seventeen, right out of high school, and never left. She worked a variety of terrible jobs before becoming a 911 paramedic in 1980, which she did for 25 years. Maggie was guitarist and a principal songwriter for the all-female extravaganza, Homer Erotic, playing clubs and festivals and recording two CDs in the 1990s. She has been awarded residencies as a composer at MacDowell Colony and Virginia Center for the Creative Arts, and in 2010 received a fellowship from New York Foundation for the Arts in Music/Sound. In 2016 she completed a field recording course with the Cornell Lab of Ornithology. In addition to her collaboration with Linda Byrne, Maggie worked with the Korean artist Sang-ah Choi on, “Packaging the Pink,” which was exhibited in Portland, and on a soundscape for her book In The Dust Zone that was used as a backdrop for readings in New York and Philadelphia.