I am an Oceanographer and Artist using (in)edible jelly to inspire people to clean up our oceans!

As an Oceanographer I have seen first-hand the horrible impact of plastic waste on our oceans. Creatures die from consuming it, ugly swathes of plastic choke the seas, pollute beaches and poison the food chain. To help reduce outfall and promote the issue, I organised beach clean events in South Wales to encourage members of the public to collect plastic from local beaches. Using this plastic I developed pieces to directly communicate to people the grotesque state of the situation. What better way than through the stomach?! As marine life is faced with inadvertent consumption of plastic, the viewer is offered a dessert saturated with it. At first, they are intrigued by the edible nature of the piece, before feeling disgust at the waste suspended inside. To create ‘Plastic Pelagic’ I mix ink, sea water and gelatin to give the work a sea-like appearance and fluid nature. The piece is kinetic like a suspended body of water, threatening to spill its contents: the gelatinous mass is a proxy for the saturated worlds’ oceans. I am currently developing Plastic Pelagic further by designing large, complex jelly moulds to display the substance in more beautiful, marine-like and horrifying shapes. I am excited to meet more artists working towards a common goal of increasing public awareness of marine plastic using art.

I have exhibited ‘Plastic Pelagic’ in public spaces and events to engage with people initially using the disgusting juxtaposition of plastic filled jelly before offering them accurate information in conjunction with the piece regarding the state of plastic in the world’s oceans. The publications displayed alongside the artwork have been supplied by Marine Conservation Society in the UK. I promote future beach clean events & tell people what they can do to reduce their individual plastic waste at the shows.

The piece relates perfectly to the Universal Sea project because it focuses on representing the sea that we are all connected to via our waterways, beaches, food chain and drinking water. It focuses on the dire state of our marine environment and inspires people to take action to reduce the problem. 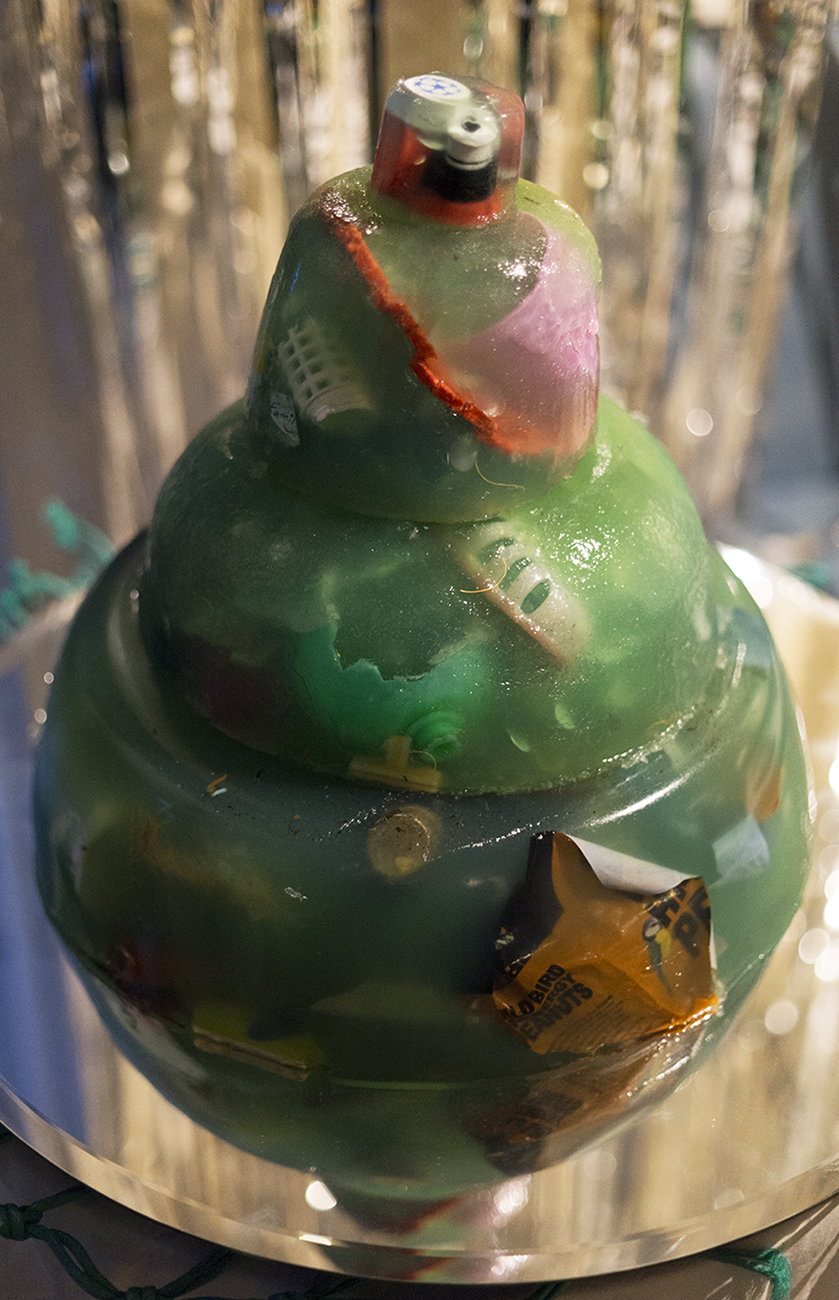 My name is Georgina Peach, I am a British artist living and working in South Wales and around the world. I graduated with a Master’s degree in Oceanography from the University of Southampton in 2012 and a foundation in art in 2016 from Cardiff Arts Academy Wales. I have developed my visual arts practice alongside my work as an Oceanographer. I have exhibited in and curated many exhibitions in the UK.

In 2016, I took part in the Brickstock festival in South Wales in a historic brickwork’s site with paintings from my project on the concept of Home. In 2017, I exhibited at a festival for International Women’s Day at West Wharf gallery in Cardiff, Wales with a large mixed-media installation titled XX:XY as a piece regarding gender within society. That year I had a solo show Pelagic Perception in Waterloo Tea galleries in Cardiff of screen and cyanotype prints regarding space within the water. That summer, I had work displayed and sold in the Royal West of England Academy in Bristol at their 165th summer Open exhibition and later in the year curated two pop-up shows Rat Trap and Loophole in Cardiff, I exhibiting ‘Plastic Pelagic’ at both shows to varied audiences.

My current work ‘Plastic Pelagic’ offers a snapshot of what plastic in the sea looks like: misshapen, imperishable and discarded inside the disconcerting form of a fluid-like gelatin dessert. It forces viewers to re-evaluate the damage upon the marine environment by plastic waste and what it means to corrupt our food chain and waterways in such a way.

As part of my 3 actions for the Universal Sea Project, I would organise beach clean events in each of the exhibition locations, using the plastic collected to run workshops in collaboration with the gallery spaces for members of the public to be involved with creating sculptures from beach plastic. I would continue to develop my project Plastic Pelagic using gelatine and expanded designs for a greater display of the pieces, using moulds I have designed to push the concept further and heighten public interest in the issue. I would give talks at the gallery spaces to spread awareness of the Universal Sea Project, my work and how the public can get involved with reducing ocean waste. I would liaise with local marine researchers and conservationists such as at the Faculty of Marine Sciences in Las Palmas during the project to make use of their expertise and maximise outreach to wider audiences. With their help and connections, events could be marketed to more people and public talks by experts in the field could be organised. Furthermore, I would document the experience by creating a film of the project’s progress and by keeping an online blog to tell the story of the Universal Sea and capture the development of Plastic Pelagic and work of fellow artists.