Tomorrow large groups of driven citizens come together to remove litter from our planet. With 150 countries participating this year it can been described as “the biggest civic action in human history.”

Plastic attack events are also being organised across the world as part of ‘World Plastic Attack Day’ happening on 15/09/2018.

Both actions are a powerful testament to the achievements that become possible when humankind unites in the hope of attaining a noble ideal for world change. The cleanups take place on beaches, rivers, forests, and streets around the world.

We, here at The Universal Sea, particularly urge people to consider how the plastic waste in urban areas impacts water reserves. We do need to act NOW!!! 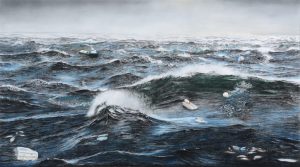 Want to get involved?

September 15, 2018 – Warnemünde Action Day + Cleanup:
One of our project’s core partners, the EUCC – The European Coastal Union Germany e.V., and the National Office for the Environment, nature conservation and geology Mecklenburg-Vorpommern are organising a day to raise awareness of coastal pollution, and explore options for responsive action.

From 11:00 you can visit information and action stands on the hostel Warnemünde, Lakeside Promenade.

At 15:00 the clean up starts at the Warnemünde beach – the Meeting Point is the hostel.

We are very pleased to be a part of our partner EUCC’s event and are involved in information stands and workshops. The Nature Conservation Youth – NAJU, the Upcycling Atelier, and other organisations will also be there with information about marine debris, and initiatives to prevent it.

More information about activities on the day can be found here.

September 15, 2018 – Berlin Demonstration:
On Saturday, 15 September, a demonstration against plastic waste is going to start at 12:30 at the Museumsinsel/Bodestraße and ends at Rosa-Luxemburg-Platz. The Bye Bye Plastik demonstration has a controversial approach: by spreading the plastic waste instead of collecting it the organisers try to make people more aware of the issue. This event already has a force behind it, with over 14,000 people engaged with the Facebook event.