We have 9 weeks to go before the book launch of our guide. We want you to know exactly what to expect from the book and to get to know the amazing people behind this project! Every week you will be able to check in on our website in order to find a new essay, article, artist or business from the guide.

This week’s excerpt is an essay by Roman Kroke. He is a lecturer at the Berlin University of the Arts (UdK) and former lawyer. As an interdisciplinary artist he is developing, coordinating and directing exhibitions, workshops and lectures throughout Europe.

Microplastics and Chameleons – Poetic Expeditions into H₂O by Roman Kroke

“What a CHAMELEONESQUE material…!” This was the very thought which struck me in spring 2017, back in my atelier after various research travels to scientific laboratories in France and Germany specialised on the impact of microplastics on aquatic environments. Plastic, a material so variable in size, colour, shape, elasticity and chemical composition, always adapting to the countless functions mankind has in store for it—I decided to take a surf on that thought. 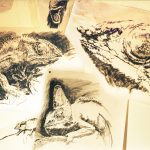 The chameleon species Archaius polyethylenus, a metaphorical personalization of plastic.

For a start, venturing into the realm of reptiles at the Berlin Aquarium I immersed myself in an extensive drawing study of chameleons—and made an unexpected discovery. Serendipity! The scales of these animals reminded me of chemical symbols. Before my inner eye I saw it crystal clear: the symbol of polyethylene melding into the chameleon skin.

My thoughts then travelled to the doctrine of the five elements in Greek philosophy, based on the idea that mankind could explain the nature and complexity of all things just by using these substances alone. In view of the omnipresence of plastic in today’s world and its significant impact on our entire ecosystem, I asked myself, if we want to be able to cope with the challenges of today’s world, is it not long overdue to extend the classical Greek canon of water, earth, air, fire and ether to plastic? And if so, would not plastic as well, like all the classical elements, deserve a poetic personalisation? The vision of a future artwork began to materialise in my mind: aquatic spring nymphs being joined in their sources by a new chameleon species: Archaius polyethylenus—a metaphor for the “evolving polarity” between the natural and the artificial. This moment has been the starting point for a series of drawings—a work in process: utopian and dystopian drafts inspired by current scientific research as well as by contemporary philosophical currents dealing with notions of “responsible citizenship” and “sustainable development.” 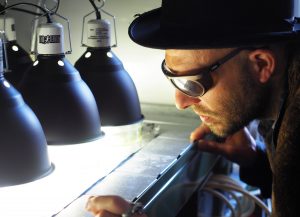 On this basis, I subsequently developed a workshop concept which premiered in 2017–2018 as part of the interdisciplinary seminar “Microplastics and Medusae” for the Berlin University of the Arts (UdK) and the Technical University of Berlin (TU), co-led with my colleague Henning Wehmeyer and in partnership with thirteen scientific institutes throughout Germany. During the first part of the seminar, a mixed group of students from both universities and diverse disciplines embarked on research travels to scientific institutes where they dived, together with the scientists, into the current laboratory practice on microplastics. The students then faced the challenge of transforming this experience into hybrid artworks; some of these creations are now presented in the The Universal Sea touring exhibition.

With respect to plastic, my particular fascination did not concern macro-plastics, visible with the naked eye, stranded along the coastline or found in the stomach of a beached whale. Accumulations of these larger chunks of plastic are obviously highly effective to make humans feel uncomfortable, as they directly disturb our aesthetic perception. However, this kind of plastic is nothing but the tip of the iceberg. An alarming portion exists in the form of so-called microplastics—particles smaller than 5mm—present on and below the water surface as well as buried in the sediments. But not only that, thanks to their size, the cycle of water and the food chain microplastics are able to travel over enormous distances. Starting their journey in small plankton that confuse it with natural prey, they may “meet” us again on our lunch table having been accumulated in all kinds of seafood. As purification plants are often unable to filter microplastics, they have also been found in our tap water. We should, therefore, be even somewhat grateful to these tiny particles. They help us to understand that plastic pollution is not an issue only relevant for people living close to the sea; it is a global problem which concerns us all. Artistic approaches may turn the invisible visible and thus serve as a bridge of communication creating an apprehensible encounter with this complex topic for the broader public.

Is the ecological crisis as we witness it today, in the form of the plastic pollution of the oceans, only due to a lack of information and knowledge? To master this global challenge, will it suffice to rationally enlighten mankind about the impact of its actions on the environment? Many people know very well that a negligent use of plastic materials is harmful to our ecosystems. Nevertheless, this mere knowledge often doesn‘t make them change their behaviour in a significant way. I argue for the following argument: the ecological crisis is also due to a relational crisis—the one concerning the connection between mankind and nature. If one takes a look at relationships between people, one could say that a sound relationship is generally built, on the one hand, thanks to the knowledge gathered about the other person. However, at least with respect to more profound relationships such as friendship and love, we are all very well aware that this tie is also substantially nourished by something well beyond pure ratio: a poetical bond. In a comparable way, I believe that the ecological crisis also relies on the fact that many people have lost this poetical bond towards nature. Exploring an ecological, scientific topic through the medium of the arts, with its specificity of appealing to reflection just as well as to emotions, can make a significant contribution to mend this damaged connection.

Projecting this idea on the plastic pollution of the oceans I henceforth propose a vast understanding of the term “nature”—in a sense that art may not only serve as a medium to revitalise man’s poetical relationship towards the element of water but also towards plastic.

Let’s be honest. Who enjoys being constantly urged not to produce trash and pollute the environment? In general, the human psyche is not really keen on negative vibes. In order to foster the sustainable implantation of an ecological conscience in our daily activities, could it therefore not be favourable to work instead on developing a poetical relationship also towards plastic? In a certain way, its multifunctional nature has perhaps also had its downside. A material that is able to serve us in almost any imaginable area of need may surely be practical and functional. But it is probably due to this very reason, that plastic lacks another quality: sex appeal. There is obviously no point in cutting plastic’s highest virtue, its multi-functionality, just to allow us to fall in love with it. A poetic personification may point to new horizons: would it not be a lot harder for everybody to pursue a thoughtless, negligent use of plastic if it was not a “material” we threw away but—metaphorically speaking—something alive? How would it be, if dealing with plastic meant taking care of a chameleon? If assuring that a piece of plastic enters the recycling process meant allowing the Archaius polyethylenus to be reborn and continue its life in a new form of existence? I do concede, not all people may share my ardent passion for reptiles—not right away at least. However, the entry for building mankind’s future “love-affair” with Archaius polyethylenus may be found in the same source which nourishes other poetic relationships: between humans these kinds of connections grow out of sharing stories; stories which make us discover “intimate” facets about each other. The future chameleon skin may therefore be inspired by photos taken of plastic with a raster electron microscope during an accelerated process of fragmentation—revealing futuristic landscapes and breath-taking chasms, a microcosm of unimagined beauty. I believe that our rather factual relationship towards plastic is also due to us not knowing any charming anecdotes about this material. Perhaps it’s time to remind ourselves, comparable to certain couples which have been living together for eternities, of how it all “started”: us and the plastic—back in the times when people were enthusiastic about this new material. In my future artworks I may therefore also research possible poetic bonds towards plastic by diving into its historical origins: the “Grand Canyons,” running through the fragmented chameleon skin, could therefore be inhabited by sceneries inspired by Roland Barthes’ 1957 book Mythologies in which he passionately contemplates about this “magic material.”

Contrary to this, revitalising our emotional bond toward the element of water should, at first sight, come along a lot more naturally. Our poetic relationship with water starts already with the fragile embryo free-floating in the mother’s womb and continues with every human’s body being mostly made out of water. In a certain way, polluting any kind of aquatic environment therefore also implies polluting ourselves. However, as the contemporary French philosopher Jean-Philippe Pierron quite rightly points out, in our modern societies, for many people water has become an abstract reality. The public service of water is discreet, often invisible. In many areas, water has been reduced to a product, which is counted, dominated and instrumentalised to serve our needs.

Many structures that require a strong and rigid base depend on triangles. In my quest of strengthening neglected relationships within the ecological crisis, I am therefore not only exploring the bonds of man towards plastic and water but also the poetic potential hidden within the encounter of these two mediums. What happens in the moment of first contact between ambient water and a plastic particle? Within seconds the formerly virgin surface is colonised by microorganisms—the starter for repulsive and attractive interactions between their cell walls and the plastic. The phenomenon of these biofilm settlements hitchhiking on floating plastics across the oceans is subject to current scientific research.

The term “conclusion” seems like an affront to the element of water, which lives through infinite cycles and prefers to flow over being squeezed into a shoebox. It will therefore rather be a wish evaporating at the end of this article: entrepreneurs, artists, designers, architects and urban planners working together to create a new public appearance of canalisation, a new generation of taps, sinks, drains, shower-heads and bathtubs reminding us every day that water should always be a lot more to us than just the formula H₂O. And the same should apply to future plastic objects: visionary designs that inspire us to treat this miraculous, chameleonesque material with the thoughtfulness it deserves.