We have 10 weeks to go before the book launch of our guide. We want you to know exactly what to expect from the book and to get to know the amazing people behind this project! Every week you will be able to check in on our website in order to find a new essay, article, artist or business from the guide.

We begin our Weekly Excerpts with an essay by Gilbert Beronneau. He is a Professor at design akademie berlin, SRH Hochschule für Kommunikation und Design for Audiovisual Communication and Dean of the Department of Design. His research topics range around the boundaries of film, art, design and social topics. He was a jury member at The Universal Sea, and has been supervising two Bachelor Theses about Plastic Waste and leads a workshop with students in connection with plastic waste, film and design (30 participants); He lives in Berlin.

Heroine of the Sea by Gilbert Beronneau

The project ‘The Universal Sea’ combines science and art. Artists engage in different works by addressing the critical state of the oceans. The role of art as a social designer questions the traditional concept of art and promotes the necessary development of art (and design) to active cultures of knowledge.

For Rainer Maria Rilke art was a “pondering possibility of new worlds and times”, with a “creative will, that remains independent even as the world breaks under its feet”. 120 years later, the world is already breaking apart, on land and on water. Johann Wolfgang von Goethe regarded art as a “mediator of the unspeakable,” opening up understandings to the intellect. For Brian Eno, the link between creative activity and intellectual life is the precondition for the project of creating a new culture. It is still about reconciling art and creativity with research and intellect, and acknowledging both areas as necessary pillars of a truly sustainable world. 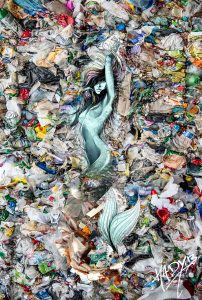 Sigmund Freud, a contemporary of Rilke, has described the practice of art as a treatment of unconscious impulses. With the disclosure of the unconscious, art was able to free itself from the illustration of reality in the late 19th century. The abstraction also made it possible to give space to feelings, that were barely made visible before. With the knowledge of the unconscious, however, not only products, processes and aesthetics were created in the modern age, which could satisfy the individual as well as the mass needs, also, destructive feelings have prevailed. Freud’s realisation that destructive impulses and desires belong to the (dark) “majesty of the ego” was confirmed in two murderous world wars and later in the continuous destruction of the environment.

In 1954, Karl Popper demanded giving up the role as passive viewers of a world that imposes its laws on us and demanded the return to Kant and his moral philosophy of responsibility for one’s own decision. At that time, research and art were still largely isolated disciplines. The ecological state of the world became more critical and not only the environmental movement recognised that disciplines are mutually dependent on the knowledge of each other, especially on the knowledge of the artists.

Ontological and epistemological questions, how artists see the world and their relationship to knowledge, have been extensively answered. Today, questions about the potential for change and innovation through art have settled in the social consciousness and point in a new direction. When art freed itself from the depiction of the material world, Rilke timelessly formulated that “the creator approaches even the most silent things with his pleading questions and, satisfied with no answer, must go on and on.” According to Rilke’s definition of art as a “world view of the ultimate goal” it not only focuses on the next work, but also on the work of world healing. In this sense, true art qualifies on a par with an independent science and intelligent politics as the social designer in the 21st century. In the project ‘The Universal Sea’ she becomes the heroine of the seas.