For me, art has always been so much more than blank rooms and paintings. She receives the biggest imponfrom art when it becomes an experience, rather than a singular piece. It’s when she is immersed in a piece that she feels the most engaged; when she can not only see the art, but also read, touch, or hear it. – Ella Schofield Lake

The picture attached is a recent commission for a chain of restaurants in Bristol. Coincidentally, the concept focused on the idea of sustainability, exploring the creative ways we can re-use harmful single use plastics, in this case, plastic bottles.

Ella Schofield Lake‘s concept is a visual tale which guides the audience into a harrowing world which is both entirely fictional yet, in some ways, utterly possible. Her proposal is a combination of sculpture and storytelling and focuses on the idea that narrative is a great catalyst for change. The Myth of the Mermaid is a clear warning. A dreary depiction of the future – A look into an alternate universe that suffers the consequences of actions that are all too similar to our own.

Now for the nitty gritty …
What issue does this proposal tackle?
The answer is CONSUMERISM.

Yes, we should blame the manufacturers that produce the harmful plastic, but in my opinion; the problem stems from somewhere so much deeper than the industry itself. The problem begins with us all, it begins with the consumerist nature of the human race. First and foremost, it is this boundless demand that must be tackled head-on.

“I believe that we cannot create lasting change without confronting the fact this sense of materialism is ingrained within us all. The root lies within societies inherent need for MORE. This is where it has begun, and this is where it has to end,” says Ella Schofield Lake.

So how does the artist plan to present these views at the exhibition?

The tale itself depicts the dangers of limitless consumerism. Whilst the sculpture – A (3 meters long) dead mermaid – is almost a sequel to that, her lifeless body is a symbol of the irreversible damage she has caused after the story.

In the exhibition, audience members will receive the myth in a booklet. They can read this as they stand over the Mermaid sculpture. The aim is that my concept will give the audience a palpable insight into the future. It should present them with some of the genuine implications we could in encounter if we do not change our behaviour, in a way which is both abstract and tangible. 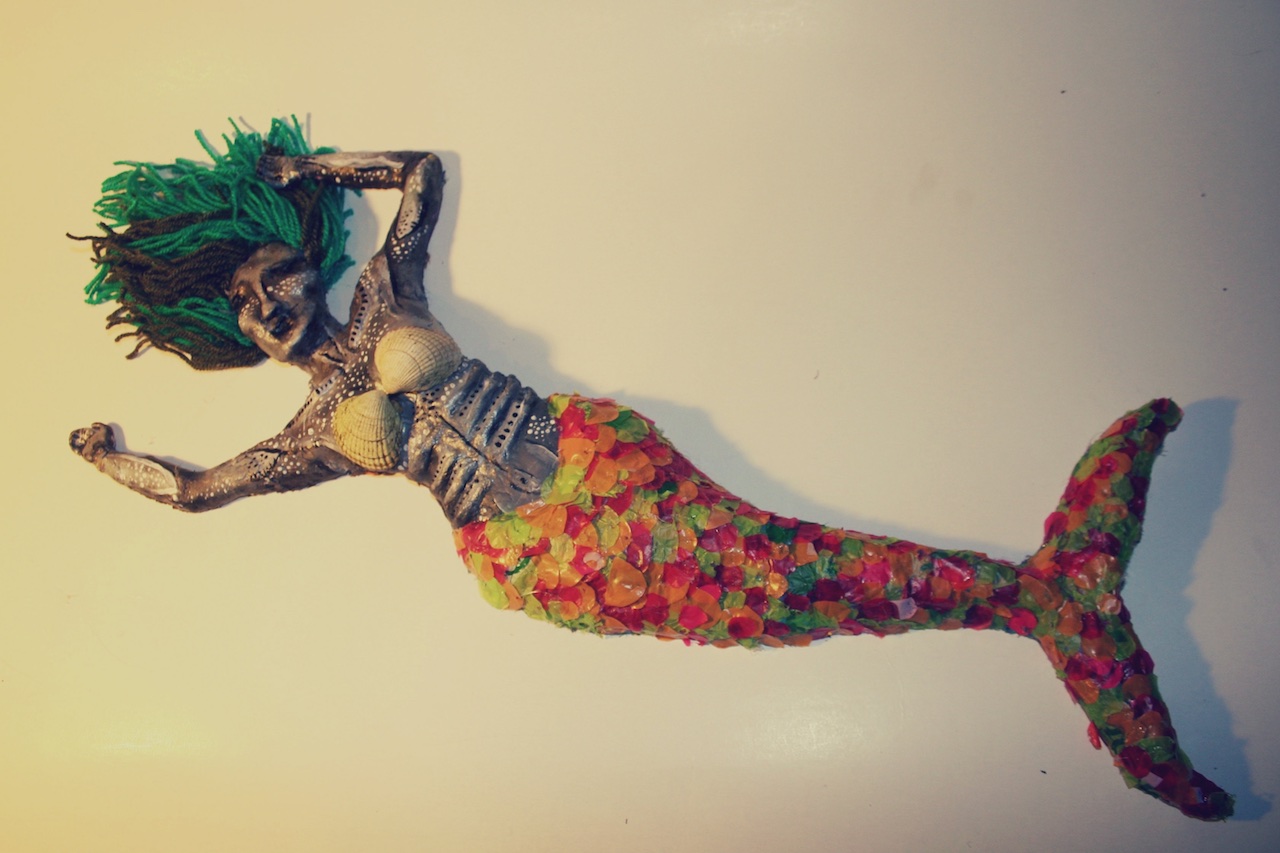 The length of the sculpture will be a huge total 3 metres wide, with the mermaid’s body sprawled across exhibition floor. The aim is to create a  realistic sculpture, which is both beautiful and terrifying at the same time.

The upper, human, body will be painted grey and silver with hypnotic patterns and a decaying texture. Materials: Wireframe // Plaster of Paris // Acrylic Paint // AND MORE.

The fish tale will be consist of single-use plastics scales, layered on top of each other. There will be LED lights hidden under the wire structure of the fish tale, giving the tail a magical glowing illusion. Materials: Wire Mesh // Single use (recycled) plastics // LED lights // AND MORE.

Similar to the ancient Greek myth of Daedalus and Icarus: the moral of this story is about power, balance, ignorance, and the dangers of not knowing your limits. But most importantly; it’s about the implications of what may happen if concerns fall on blind eyes.

This story is laden with symbolism in regards to plastic pollution/consumerism. The aim is that the tale will awaken the public to the damage done to our oceans from a different perspective, a perspective that is both encapsulating and eye-opening to what lies beneath the ocean, how we have got here, and how our mindset needs to change. The artist thinks the element of storytelling will be hugely beneficial. The narrative is a great catalyst for change because it opens up space for debate. It creates a context in which you can see the same issue from many perspectives and ultimately allows an audience to perhaps have a wider, more established understanding on an issue. It allows issues like plastic pollution to suddenly seem more tangible and concrete.

Here is a taster of the myth:

Thélo knew the depths of the ocean like it was part of herself. She was not only a mermaid but the goddess of the sea so incontestably that every current was influenced by her movements. She held reign over the oceans for millions of years with a comforting consistency for all inhabitants. And although time did not pause, it was as if the oceans could stand the test of time.

Thélo had unmistakable strength and intelligence, but much like other gods, she also possessed a power which hung so delicately on the edge of danger. A power that has boundless potential, but in the hands of just an inch of greed could have inconceivable consequences. Elenchos, both a great god and friend, had once warned her this – “You do not know the infinite possibilities that lay dormant at your fingertips. Like volcanoes, there is a dangerous fire within you that is hidden deep under the ground. Tread carefully, your decisions may cause exceptional destruction. And once this power erupts, it may change the face of the world irreversibly.”

Over a 2 week basis, we will encourage the city to start donating their plastic waste into huge clear tanks in the centre of the city (located in a public space if possible). These huge containers should start filling up over time. This imagery will be great for exposing the hidden aspects of waste disposal. It will exemplify the colossal amount of waste we produce as a society, an image we are disconnected to throughout our whole lives. I will also confront local restaurants and shops, proposing that i collect their plastic waste at the end of each week to fill the tanks, in the return that they review their recycling policies. The clear containers will have the words – “THIS GOES NO WHERE” printed out large. At the end of the time period, the plastic will be donated to a recycling unit.

This will be an open theatre performance of the Mermaid Myth, with an additional talk/debate at the end. It will take place in a rented public space, with a reading of the myth, which will incorporate puppetry/dancing/acting. The following debate will simply be a discussion with the audience, focusing on a few of the following questions – How can you improve the situation as individual? How much are we to blame for contributing to consumerism? How can we improve our lifestyle? This will be a free, informal gathering for the public with drinks and snacks.

I will run a family friendly crafts workshop using single use plastics. In the workshop we will make glass painted fish scales out of the plastic waste they bring from their own home. This can either be a contribution to my mermaid sculpture scales, or can be made into their own mini fish sculpture. This will take place in a public rented room. We will also engage in conversation with the participants about the plastic they have brought, how it ends up in the sea, and the damage it is causing. We will give out leaflets, posters, website info, etc.

Ella Schofield Lake resides in the lovely city of Bristol, United Kingdom. She is a freelance artist who works with the medium of installation, decor and sculpture. She tends to work within the festival and event industry, and have been drawn to this area since she believes that art is best when viewed by the many. She has experience working with a variety of organisations from Lanterns for Glastonbury Festival to Decor for local restaurants.

“And so, we reach the end of my proposal. I would love your vote, but it is entirely up to you. I truly hope you are enticed by my proposal.” – Ella Schofiled Lake

Thank you for reading, Good luck everyone.