“Let’s build together our plastic labyrinth and get lost in it! This is what we are doing in real life in a way so let’s recreate it in this playful symbolic form and experience the threatening maze.

As an art happening project, we would like to create a huge labyrinth made of plastic waste cubes. As an eco-art project, we build a huge labyrinth made of 50 x 50 cm plastic waste cubes with the help of the audience on the square in front of the Basilica in Budapest. People can enter and they can get lost in here and the goal is to find the way out. With this, we represent the urgent necessity of finding a way out together of our real common plastic pollution problem on our planet Earth. During the labyrinth-journey, we have time to think through the whole problem circle.” – Júlia Végh 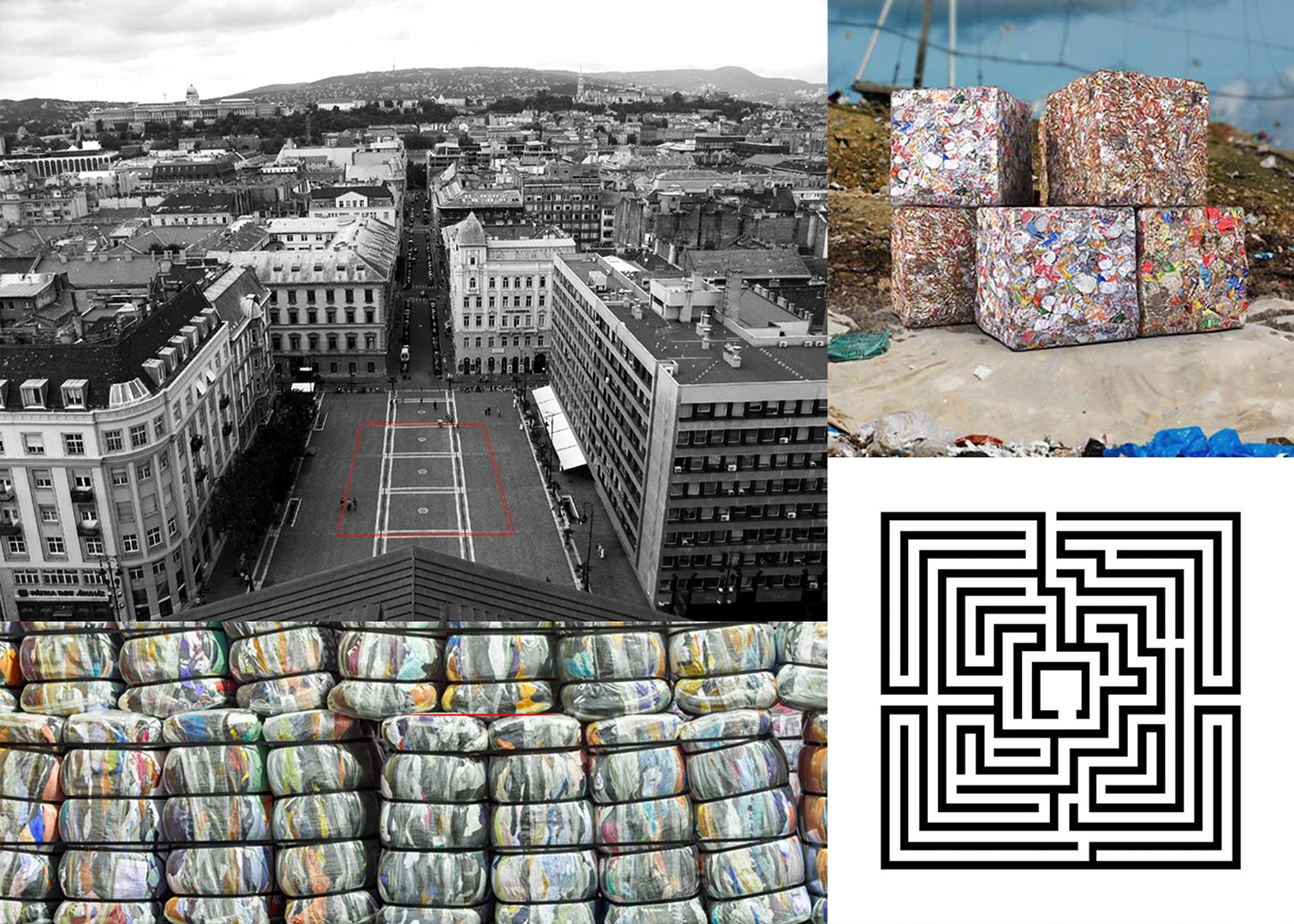 This communal art project is a calling for the urban citizens to face the gigantic amount of plastic waste at one place what they don’t meet usually in their everyday life. This is a game for first sight but soon it becomes very serious. Probably the surrealistic situation at a usual urban space will throw people off balance and make them feel uncomfortable and think about the problem and possible solutions.

Our public space happening can be installed in the white cube of a museum as well.

“We would video and photo document the process of building the labyrinth and how people walk and get lost in it. Also, we would make interviews with some of them how they felt in the trash-labyrinth,” comment the artists.

The group SQUARESPACE consists of two artists, a painter and a filmmaker.

The painter Júlia Végh was born in 1990 in Budapest. She lives and works in Hungary. She has graduated from the Hungarian University of Fine Arts (MKE) in 2015. She won art prizes like ESSL Art Award CEE in 2015, Barcsay Jeno Fine Art Foundation Prize and the Unicredit Gifted Program Contemporary Arts Creators Project in 2014. Also, she was selected by Imagio Mundi Luciano Benetton Collection. She has been in group exhibitions in London and Wroclaw. She took part in a 60th Vasarhely Autumn Society exhibition in 2013 at the Tornyai Janos Museum in the Hungarian town of Hodmezovasarhely. Her work was also chosen by the Ferenczy Museum in Szentendre in 2014. www.veghjulia.com

The filmmaker Erika Kapronczai was born in 1985 in Szigetvar, Hungary. She lives and works in Budapest. She got her diploma with master degree and declared Master of Arts in Aesthetics at the University of Pécs Faculty of Sciences (PTE BTK) and another diploma with master degree declared Film and Television Director at the University of Theatre and Film Arts (SZFE) in 2015. Her first significant short film Well under the Sun has a premiere in Urania National Film Theatre in 2013. She directed an episode THREESOME in the omnibus film Meanwhile in Budapest what was distributed in the Hungarian cinemas in 2014 and 2015. She is a co-founder of the Dreampire startup project founded in 2013 and hold an exhibition in Galeri Nasional Indonesia, Jakarta in 2014. Besides she is writing her first feature film script she is working on documentary movies and also in the commercial field of moving image.