We are daily witnesses of consumer mania and the greedy accumulation of unnecessary things in order to satisfy the trivial human needs presented to us as an existential necessity by the media. Products are produced for short term usage, of poor quality, all in order to make companies more profitable. 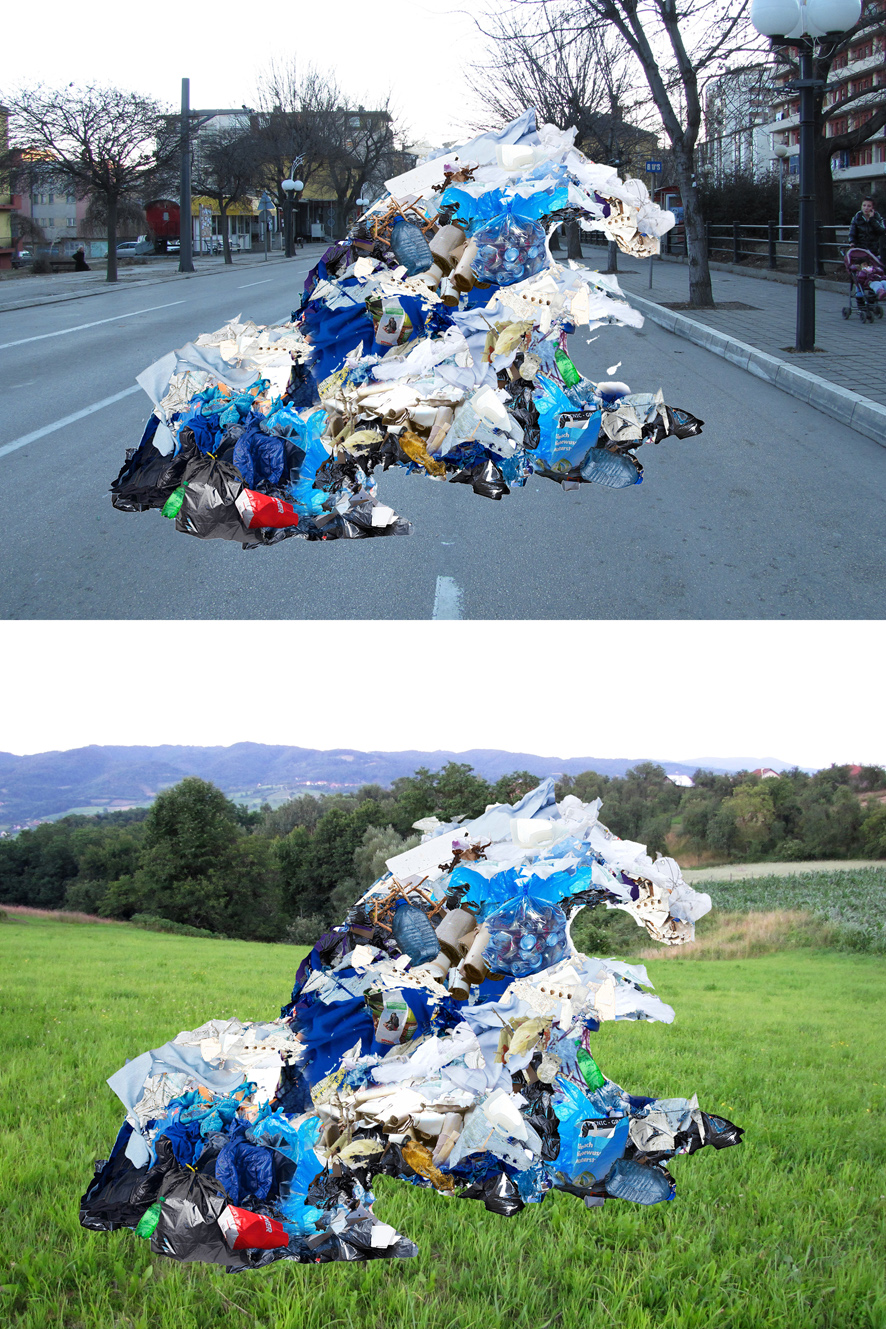 We are victims of a system that skillfully manipulates us, a system that is based on our weakness, thriving on it.Not to accept things lightly and automatically but independently decide on our own lives and our needs, resisting the unscrupulous influence of marketing industry is the only way out of this vicious circle.

The way we influence the planet today is crucial for our future tomorrow.
Through her work, Nevena Vuksanovic, directs people’s attention to the recycling of garbage, which is one of the most important issues of our time. With the new recycling form that turns garbage into an artwork, she would draw attention to the unconscious side and the behaviour of a modern consumer.

The procedure of making this sculpture tries to find an answer to one of many problems considering ecology, above all starting from the ecology of our consciousness, moving towards our environment. The sculpture of waves made out of garbage which is placed in the public area or in nature would be interpreted as a warning of unwanted future that awaits us if we continue to behave selfishly and disrespectfully towards nature.

On a large wooden board, the artist would install a straighten thin boards which would be used as a construction. On them, she would fasten short perpendicular boards. She would fill in the nets made of rope with discarded materials found on the beach. These nets would later hang glued on vertical boards. Embedded white objects would remain on top of the sculpture that should remind us of the foam created by the waves.

Three Actions
1. Choosing a suitable location in a public place with a group of volunteers, young people and children to organize the collection of garbage on the beach, in the city, close to the river…
Collected garbage will be brought to the place where the installation will be made.
2. With the help of volunteers, the artist will make his installation. All those who did not participate in the collection of garbage and they want to contribute with their unnecessary things to the appearance of the sculpture can bring these things to the scene. The action would be documented through photos and videos and posted on social networks.
3. When the installation is complete, I would hold a workshop for children so  that the children could create ingenious creatures as sculptures from the remaining material  and got acquainted with one of the possible ways of protection of our oceans.

Nevena Vuksanovic was born in Belgrade, Serbia, in 1988. After her third grade in school, she attended private lessons in painting and drawing at the same time. She nearly completed the High School for Graphic Design when her professor discovered her talent for sculpture. In 2007 she enrolled at the University of Fine Arts in Belgrade, Department of Sculpture, and finished her Master studies in the class of Prof. Mrdjan Bajic in 2012. She won three times the award for ”Sculpture in Metal” of the municipality of Savski Venac. In 2016 she got nominated for the BLOOM Award by Warsteiner in Cologne, Germany.